Items related to An American Jubilee: The Art of Jane Wooster Scott... 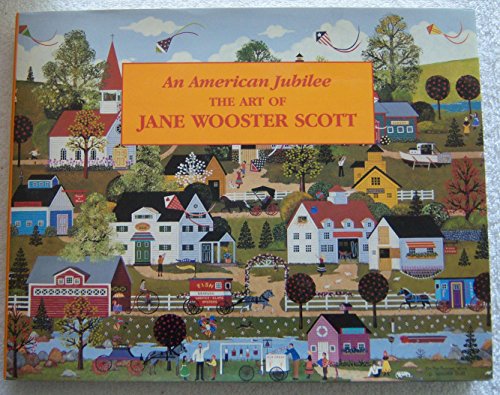 The art of Jane Wooster Scott speaks to all generations of living Americans, and to generations yet unborn, who savor our nation's rich heritage in all its colors and manifestations.
Wooster Scott, a Philadelphia native, has traveled the length and breadth of the United States recording an era that sets forth the standards and values of this country. Combining a keen eye for beauty, humor and the zestful energy of this youthful colossus of the Western Hemisphere, Wooster Scott captures the essence of the American people, their traditions and institutions.
Her naif art brings to life the broad American landscape, dotted as it is with cities, towns and villages unique to our culture, along with farms, factories and waterfronts that are singularly New World. She offers us a perfect portrait of ourselves and our forefathers and a spark of hope for how we will be in the centuries ahead.
As a painter, Wooster Scott has succeeded in advancing the intricate discipline of naif art to its highest plane, popularizing primitive American painting in Europe, Asia and other parts of the world. She has been hailed by critics nationwide, but the truest test of the artist's worth is her popularity among collectors of her original canvases and countless thousands who treasure her lithographs and serigraphs.
Some 175 paintings represented here in An American Jubilee, The Art of Jane Wooster Scott reflect twenty years of dedication to preserving the priceless panoply of a nation unlike any other in the history of mankind in which the dignity of man has blossomed as never before.

Jane Wooster Scott had not been formally trained in technique when, as an adult, she began to experiment with oil painting. In this aptly named collection of her work, the jewel-like colors of her compelling compositions spring from the page. Following in a tradition of American folk art that employs flat use of color and attention to detail, Wooster Scott paints a charming, Norman Rockwellian vision of American communities. The majority of these delightfully bustling scenes are patriotic tributes to such turn-of-the-century seasonal rituals as ice skating, pumpkin harvesting, carnivals, and parades. The accompanying text is trite and undermines the strength of the work, but luckily the full-page reproductions speak for themselves.

5. AN AMERICAN JUBILEE: THE ART OF