Items related to A Nation of Women: An Early Feminist Speaks Out: Mi... 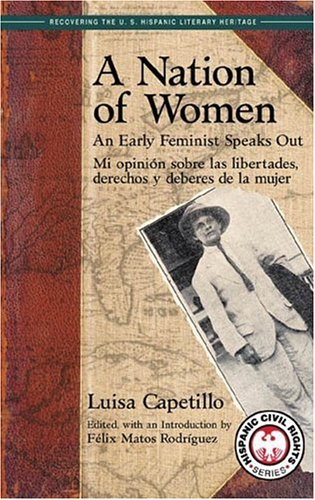 Cultural Writing. Political Writing. Latino/ Latina Studies. Luisa Capetillo is best known in popular culture as the first woman to wear men's trousers. The splash of recognition following her arrest and acquittal for her choice of clothing in 1915 overshadows her significant contributions to the women's movement and the anarchist labor movements, both in her native Puerto Rico and in the migrant labor belt that stretched along the Eastern United States, from Tampa to New York. This volume combines a facsimile of the original Spanish edition with the first English translation of Capetillo's landmark MI OPINION SOBRE LAS LIBERTADES, DERECHOS Y DEBERES DE LA MUJER, originally published in Spanish in 1911. MI OPINION is considered by many to be the first feminist treatise in Puerto Rico and one of the first in Latin America and the Caribbean.

At once a sharp critique and a celebration of the gathering fervor of world politics, Capetillo views both her native Puerto Rico and the world outside, providing a sense of the workers movement and the condition of women at the turn of the century. Capetillo embraces the humanistic thinking of the early twentieth century and envisions a world in which economic and social structures can be broken down, allowing both the worker and the woman to be free.

LUISA CAPETILLO was born in Arecibo, Puerto Rico in 1879 to working class parents. She worked in cigar factories as a reader, where she first became active in labor organizing. A committed activist, Capetillo traveled throughout Puerto Rico, the United States, and Cuba to contribute to the international labor movement. She wrote extensively both for the Spanish press, notably in La Mujer, a short-lived feminist working-class magazine that she founded. She is the author of many works relating to her ideas, among them La humanidad del futuro (1910), Verdad y justicia: Cuento de Navidad para niños (1910) and Influencias de las ideas modernas (1916).

FELIX V. MATOS RODRIGUEZ is the Director of the Center for Puerto Rican Studies at Hunter College in New York City.