Items related to To Heal the Earth: Selected Writings Of Ian L. McHarg

To Heal the Earth: Selected Writings Of Ian L. McHarg 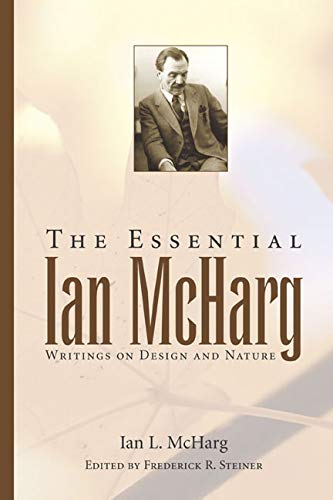 Ian L. McHarg's landmark book Design with Nature changed the face of landscape architecture and planning by promoting the idea that the design of human settlements should be based on ecological principles. McHarg was one of the earliest and most influential proponents of the notion that an understanding of the processes that form landscapes should underlie design decisions.In To Heal the Earth, McHarg has joined with Frederick Steiner, a noted scholar of landscape architecture and planning, to bring forth a valuable cache of his writings produced between the 1950s and the 1990s. McHarg and Steiner have each provided original material that links the writings together, and places them within the historical context of planning design work and within the larger field of ecological planning as practiced today.The book moves from the theoretical-beginning with the 1962 essay "Man and Environment" which sets forth the themes of religion, science, and creativity that emerge and reappear throughout McHarg's work -- to the practical, including discussions of methods and techniques for ecological planning as well as case studies. Other sections address the link between ecology and design, and the issue of ecological planning at a regional scale, covering topics such as education and training necessary to develop the field of ecological planning, how to organize and arrange biophysical information to reveal landscape patterns, the importance of incorporating social factors into ecological planning, and more.To Heal the Earth provides a larger framework and a new perspective on McHarg's work that brings to light the growth and development of his key ideas over a forty year period. It is an important contribution to the literature, and will be essential reading for students and scholars of ecological planning, as well as for professional planners and landscape architects.

Steiner is a Fellow of the American Society of Landscape Architects and Council of Educators in Landscape Architecture and a presidential appointee to the national board of the American Institute of Architects. As a Fulbright-Hays Scholar in 1980, he conducted research on ecological planning at the Wageningen Agricultural and Environmental Science University, The Netherlands. In 1998 he was the National Endowment for the Arts Rome Prize Fellow in Historic Preservation and Conservation at the American Academy in Rome. Steiner has written, edited, or co-edited 17 books.

"Ian McHarg's work is seminal; it is an ethical and scientific touchstone for everyone trying to discern humanity's rightful and meaningful place as part of the natural world. He moved ecology from a marginal to a central concern and changed design and planning forever." (William A. McDonough, William McDonough + Partners)

"Beginning almost alone, Ian McHarg has energized-by the wizardry of his language coupled with a new world vision—not only the profession of landscape architecture, but two generations of citizens now able to call themselves environmentalists. Broad is his brush as well as his scope. Fortunate are we to get so much of his breadth compressed into these pages." (Grady Clay, author, public radio commentator, and former editor of "Landscape Architecture")

"A true visionary and passionate believer in the inter-dependence of man and nature, Ian McHarg has played a major role in the environmental revolution. His selected writings in To Heal the Earth provide a fascinating record of how through theory, practice, and powerful advocacy he has brought an ecological imperative to landscape and urban planning." (Russell E. Train, Chairman Emeritus, World Wildlife Fund, and former administrator, EPA)

1. To Heal the Earth: Selected Writings Of Ian L. McHarg

2. To Heal the Earth: Selected Writings Of Ian L. McHarg

5. To Heal the Earth: Selected Writings Of Ian L. McHarg

6. TO HEAL THE EARTH: SELECTED WRIT