Items related to The Queen's Bastard 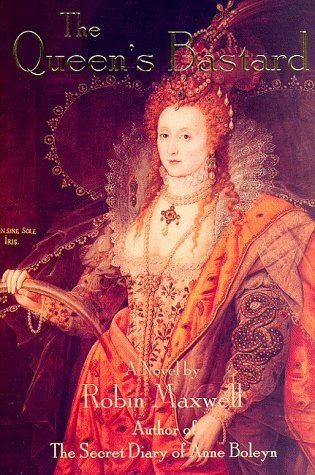 A rich evocation of 1588 England follows the adventures of Arthur Dudley, the illegitimate child of Elizabeth I, who is presumed dead by his real parents and who only learns of his true identity at his adoptive father's death. By the author of The Secret Diary of Anne Boleyn. 40,000 first printing. Tour.

Robin Maxwell is the author of The Secret Diary of Anne Boleyn. She lives in California and is currently working on a prequel to The Queen's Bastard.

My Father is dead and my Mother is Queen of England.

The handwriting on the first page of the blue leather journal was bold in stroke and plain in design. The author, a tall, powerfully built man, gazed out across the vast expanse of sea, his red-gold hair whipping sharply round a strong-boned jaw. The face was deeply lined and ruggedly handsome, With searing black eyes that blazed with a fine intelligence. As he steadied the volume he held upon his knees, he hoped the ocean would remain calm and the winds too, for he was unused to such writing, and was hard pressed enough putting his thoughts to paper without this tilting ship sending his inkwell flying or the pages flapping about in the breeze.

Far off to starboard a flock of gulls in straggling formation caught his gaze. Probably making for the Canary Isles, he thought, but a long way for gulls to be from land. Dipping his quill in the inkwell at his knee, he began again, considering each word before committing it to the vellum page.

My name is Arthur Dudley, he wrote. These are words which ring to my own ears as strange and ungainly, but they are nevertheless good and true. That which follows is not a diary, for until the events of several years past I had thought so little of my own life and condition that the conceit of journal keep ing had entered my mind never once. Instead, this document constitutes the twenty-seven years of my history as best I remember it. A memoir. Tis odd that such a plain lift as m y own should be worthy of remembrance. But as I have said, I am the son of a Queen and therefore mentionable.

The creak of the sails on the mizzen as the wind shifted pulled him sharply back to the deck, the day, the sun dipping toward the western horizon. He sought the flock of gulls, but they were no longer off to starboard, nor were they dead ahead where he expected they would have traveled. How could this be? The birds had been in the air a moment before. He scanned the sky round him. There! The flock was a diminishing speck still flying low, but off the port side.

"I have been lost," said Arthur to himself, "lost within the words I have been writing." Time, he realized with a pang, had simply vanished, gone whilst within the thrall of memory -- a bit of natural magic. Arthur Dudley smiled with the thought. Each day of his voyage to the New World he could write his life, and for those few moments would become a conjurer of time.