Reluctant Genius: Alexander Graham Bell and the Passion for Invention 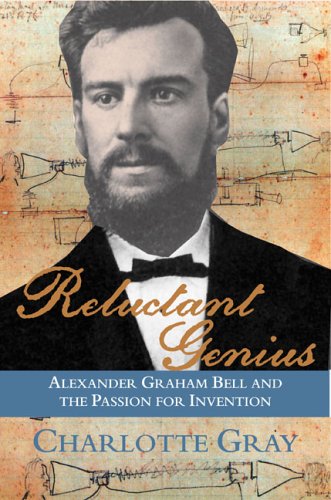 Draws on new research to offer insight into the prestigious inventor's private life, as well as his passionate drive for new innovations, discussing the influence of his speech therapist father and deaf mother on his work, his tempestuous relationship with his wife, and his avoidance of fame and fortune. 15,000 first printing.

AUTHORBIO: Charlotte Gray, a historian, biographer, teacher, columnist, and radio and television commentator, is one of Canada's best known and most highly respected writers. She has written five bestsellers and won numerous awards for her work. She lives in Ottawa.

Gray recounts both the inventor of the telephone's creation of the device and the projects he pursued once his future was secured. Bell is portrayed as imaginative and neurotic, but his marriage to a steadier sort kept him on even keel, if not exactly scientifically disciplined. She was Mabel Hubbard and is so present in Gray's work as to make it a dual biography. Deaf teenager Mabel met Bell when he taught the hearing-impaired, and Gray's story of their courtship is intertwined with the story of how Mabel's father became involved in Bell's side project of transmitting sound by wire, much in the scientific air in the 1870s. Without the worldly Mr. Hubbard's legal and business management, Bell might not have succeeded; certainly none of his subsequent inventions had the eclat of the telephone. Combining the household history of the Bells with that of Alexander's successive enthusiasms (Helen Keller, kites, airplanes, hydrocraft), Gray fairly portrays the attractions and exasperations of Bell's life. Gilbert Taylor
Copyright © American Library Association. All rights reserved

1. Reluctant Genius: Alexander Graham Bell and the Passion for Invention

2. Reluctant Genius: Alexander Graham Bell and the Passion for Invention

3. Reluctant Genius: Alexander Graham Bell and the Passion for Invention