Items related to Maxwell: The Rise and Fall of Robert Maxwell and His...

Greenslade, Roy Maxwell: The Rise and Fall of Robert Maxwell and His Empire

Maxwell: The Rise and Fall of Robert Maxwell and His Empire 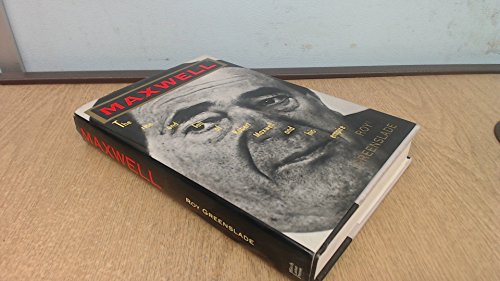 Examines the life of the British publisher and financier, and looks at his rule over the Mirror and his role in "Mirrorgate"

When Robert Maxwell met his mysterious death offshore the Canary Islands less than a year ago, the world first thought it had lost a billionaire media baron. As soon became apparent, however, Maxwell had been a great pretender whose fiscal chicanery marked him among the globe's meanest and most daring swindlers. In his authoritative, dirt-dishing audit of the mercurial Maxwell's career, Fleet Street veteran Greenslade dashes any lingering notion that much good was interred with his subject's bones. The author made the most of his relatively brief tenure at London's Daily Mirror--the UK's top tabloid as well as Maxwell's flagship paper--accumulating a wealth of anecdotal evidence on his employer's autocratic, boorish, meddlesome, and secretive management style. While Greenslade doesn't claim to have realized that the Czech-born Maxwell was looting the pension funds of companies under his control, he decided, after evaluating the leveraged condition of the proprietor's publicly held and private enterprises (British Printing, Macmillan, Mirror Group Newspapers, New York's Daily News, etc.), to withdraw from the corporate retirement program. Meanwhile, the author recounts, he, fellow journalists, and analysts in The City (London's Wall Street) had precious few doubts that an overextended ``Cap'n Bob'' was heading for a fall because of his inability to meet debt-service obligations--and because of what associates dubbed ``the Max factor.'' That the truth of the matter turned out to be far worse than imagined was due, Greenslade says, to the vagaries of English business and libel law, plus Maxwell's litigiousness and willingness to run risky bluffs in pursuit of illusory rewards. He concludes that Maxwell committed suicide rather than face the disgrace of exposure as a lifelong grifter. Although Greenslade has an axe to grind, he sets a high standard by offering an objective if unsparing portrait of a villain who was often in error but seldom in doubt. (Eight pages of b&w photographs--not seen.) -- Copyright ©1992, Kirkus Associates, LP. All rights reserved.

In this juicy, relentlessly unflattering, at times vindictive portrait of Robert Maxwell, who died mysteriously last November, Greenslade strips away the facade of the boastful press baron to portray a panic-stricken con man who massively plundered his public companies and his employees' pension funds in an effort to save his debt-ridden empire. Greenslade was editor of London's Maxwell-owned Daily Mirror until March 1991, when he left because of the tycoon's "gross editorial interference." The Maxwell who swaggers through these acid pages is a shameless self-promoter, a windbag politician during his six years in Parliament, an authoritarian boss given to violent mood swings and a brutal, tyrannical father to his seven children. His marriage was such "a sham" that he and his wife Betty lived apart despite a public show of unity, Greenslade reports. He also details Maxwell's misuse of company funds and, with support from a pathologist's report, argues that the press lord probably committed suicide because he could not face the public disgrace of "being revealed as a cheat and a thief." Photos.
Copyright 1992 Reed Business Information, Inc.

1. Maxwell: The Rise and Fall of Robert Maxwell and His Empire

2. Maxwell: The Rise and Fall of Robert Maxwell and His Empire

3. Maxwell: The Rise and Fall of Robert Maxwell and His Empire Greenslade, Roy