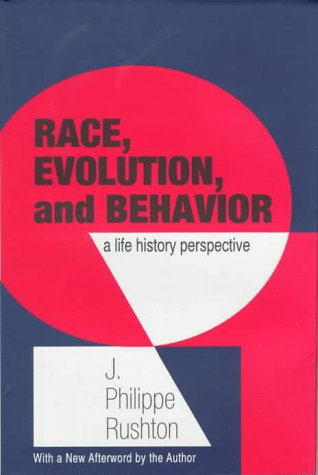 J. Philippe Rushton is a professor of psychology at the University of Western Ontario, London, Ontario, Canada. Rushton holds two doctorates from the University of London (Ph.D. and D.Sc) and is a Fellow of the John Simon Guggenheim Foundation, the American Association for the Advancement of Science, and the American, British, and Canadian Psychological Associations. He is also a member of the Behavior Genetics Association, the Human Behavior and Evolution Society, and the Society for Neuroscience. Rushton has published six books and nearly 200 articles. In 1992 the Institute for Scientific Information ranked him the 22nd most published psychologist and the 11th most cited. Professor Rushton is listed in Who's Who in Science and Technology, Who's Who in International Authors, and Who's Who in Canada.

"Rushton is a serious scholar who has assembled serious data." -- Charles Murray, Afterword to The Bell Curve