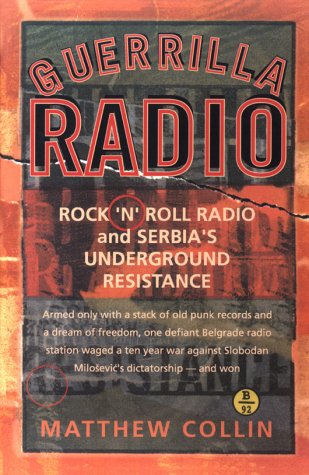 This is a book about a group of Belgrade’s young idealists and their pirate radio station B92, who began with the naive desire to simply play music, but ended up facing two wars, economic sanctions, violent police and government crackdowns, the attentions of armed gangsters and neo-Nazi politicians, and ultimately became the leaders of an opposition movement forced into exile. Before Milosevic was finally ousted in October 2000, B92 would be shut down and resume broadcasting four times as, through an inspired combination of courage, imagination, and black humor—and a playlist, from The Clash’s “White Riot” to Public Enemy’s rap manifesto, “Fight the Power,” which in sound and spirit, echoed the street fighting in which they sometimes took part—it somehow persisted in disseminating the truth. Matthew Collin knows the founders of the station well and has had extraordinary access to the key personalities and their archives. He first reported on the station as part of a feature on Belgrade’s mass street protest in 1996. The book is based on in-depth, first person interviews and exhaustive background research. “Matthew Collin captures the conviction of a generation whose culture and identity were under siege....”—Independent on Sunday

Review:
"A welcome reminder that pop music really can be the soundtrack to revolution." -- Douglas Wolk, Blender, July 2002