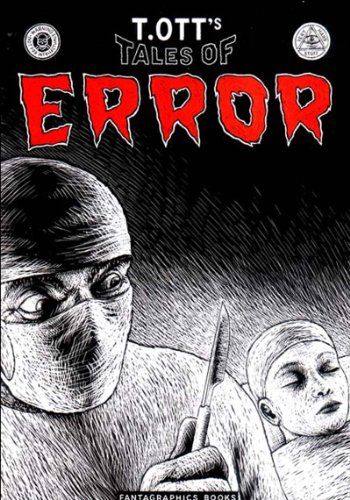 Europe's master of modern wordless horror returns with his third book. With T. Ott's Tales of Error, Ott directs a nod toward the classic horror formulas of EC Comics (Tales from the Crypt, Shock SuspenStories, Weird Science) and Rod Serling's Twilight Zone, with a decidedly contemporary spin. This collection contains six beautifully rendered and horrific stories. "Honeymoon," the opening story, depicts the love and happiness of Doris and Dave, to the shock of their friends. A final postcard of the couple's honeymoon reveals the happy duo to be literally joined at the hip: as Siamese twins. E.C. purists will surely appreciate Ott's skillful manipulation of images and text, seemingly directing readers in one narrative direction before leading to an unexpected but credible ending worthy of O. Henry. From the classic war story to unraveled romance, Ott puts his personal twist on several classic genres. Adding to his large European audience, particularly in France and Germany, Ott continues to build an American audience. His meticulous scratchboard style is unparalleled in its craftsmanship, provoking awe and admiration in the face of the repeated horrors portrayed; Ott is unequivocally one of the preeminent horror cartoonists being published today. 48 pages b/w illustrations.

Thomas Ott is the lead singer of The Playboys and also works in animation. He lives in Switzerland. Other Ott books published in America include Dead End and Greetings from Hellville.

Swiss artist Ott's third graphic-story album accorded U.S. publication in little more than a year (after Greetings from Hellville [BKL Je 1 & 15 02] and Dead End [BKL F 1 03]) showcases six 1980s stories, one of which employs written narrative, something Ott soon expunged from his pages. Ott's broad variation, from panel to panel, of point of view and specific subject; his intricate, scratchboardlike, chiaroscuro draftsmanship; and his taste for the morbid appear already fully developed in this early work. The pieces don't all involve violent death, however, and several bespeak a revulsion for sex and the body that isn't as prominent in the later books. The humor of disgust is everywhere, expressed directly in the surprise endings of "Honeymoon" (the one with the prose narrative, which is annoyingly misleading), "A Wrinkled Tragedy," and the already gory "Headbanger" and coursing beneath the antiromanticism of "The Hero." Absorbed in mere minutes, Ott's early stories, no less than his later ones, fix themselves permanently yet corrosively in one's memory. Ray Olson
Copyright © American Library Association. All rights reserved

Book Description U.S.A.: Fantagraphics Books, 2003. Hardcover. Condition: New. T. Ott's Tales of Error hardcover in new condition. The book is contained in shrinkwrap and does not have any visible wear. Browse our other products and combine with this order to save on shipping. Seller Inventory # 2890