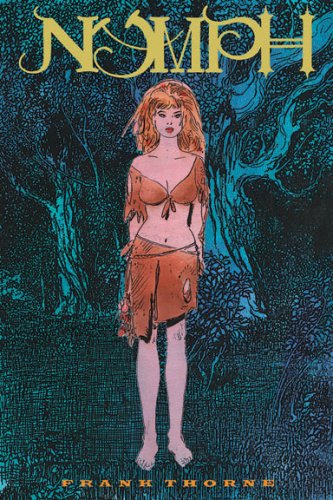 by Frank Thorne
After writing his two autobiographical volumes, Drawing Sexy Women and The Crystal Ballroom, where Frank Thorne roamed deliciously from his accustomed milieu, he returns to amorous prose with Nymph, the untold story of a beautiful young foundling: the adolescent but not quite innocent Ghita of Alizarr. Nymph is a lusty narrative of true love lost and obsession in an ancient world. The epic tale is told by Fordel of Themm, her dubious consort and theatrical provocateur. We follow a troupe of traveling players as they perform "Ramballock," a rollicking show of live sex and burlesque. "No one will believe Thorne wrote it, but he did, and it's his magnum opus!" opined Ryder Windham, esteemed author, editor, and former Fantagraphics visionary.

Frank Thorne has had an extensive career in comics including working on Red Sonja for Marvel Comics and creating Ghita of Alizar. Thorne's work has also appeared in Heavy Metal and Playboy. He lives in South Plains, New Jersey with his wife.

Book Description Fantagraphics Books. Condition: Acceptable. Paperback The item is fairly worn but still readable. Signs of wear include aesthetic issues such as scratches, worn covers, damaged binding. The item may have identifying markings on it or show other signs of previous use. May have page creases, creased spine, bent cover or markings inside. Packed with care, shipped promptly. Seller Inventory # M-04-1880

Book Description Fantagraphics Books, 2006. Condition: Good. A+ Customer service! Satisfaction Guaranteed! Book is in Used-Good condition. Pages and cover are clean and intact. Used items may not include supplementary materials such as CDs or access codes. May show signs of minor shelf wear and contain limited notes and highlighting. Seller Inventory # 1560977671-2-4