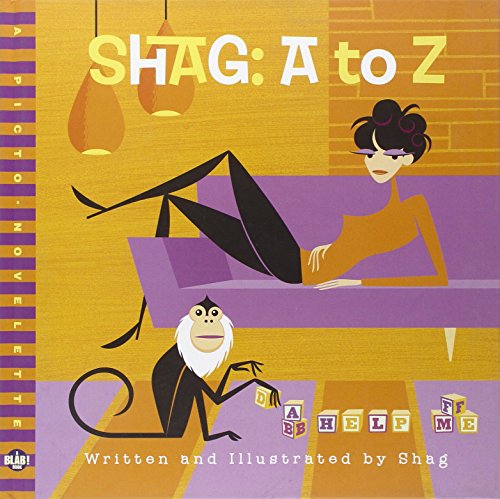 by Shag
Shag: A to Z presents, quite simply, 26 original paintings corresponding to the letters of the alphabet. Each painting is accompanied by a short verse extolling the pleasures of a hedonistic lifestyle and the virtues of overindulgence. Shag has spent the last decade creating a body of work based on his idiomatic aesthetic preferences, a world of mid-20th-century modern architecture and design, populated by hedonists, supplicants, and indifferent women.

Shag lives in Southern California. A live theatrical dance production based on his artwork, Shag With a Twist, is currently running nightly at the Plaza Hotel and Casino in Las Vegas.

Monte Beauchamp edited The Life & Times of R. Crumb from St. Martin's Press, and the popular Blab! series. His work has appeared in Print, Communication Arts, American Illustration, and the New York Festival's Annual of Advertising. He lives in Chicago, IL.

This new entry in editor Monte Beauchamp’s line of adult picture books deserves a place on every glass-sheet-topped coffee-table in America. It’s an alphabet book with, for each letter, a clever quatrain placed within what looks for all the world like a 1950s linocut ad pitched to the would-be hip. With its clean curves, precise geometry, single-color masses, restricted palettes (no more than four pastel hues per page), and backdrops reminiscent of the undersides of linoleum floor tiles, this graphic manner somehow became inalienably associated with the swinger lifestyle as led by, for instance, the iconic Rat Pack (Frank, Dean, and Sammy are the star attractions of “H is for Hipster” herein). Agle, whose nom-de-palette is Shag, absolutely commands, in words as well as figures, the boozy urbanity of such commercially calculating hipness, which we now admire as quaint. An album that just dares you to keep an indulgent smirk off your face while perusing it. --Ray Olson