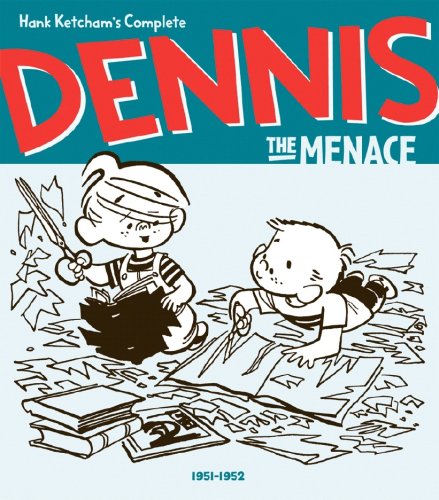 by Hank Ketcham
Now in Paperback! The first two years of Hank Ketcham's classic! Hank Ketcham's Dennis the Menace began on March 14, 1951 and went on to become the second most-popular cartoon kid in the world, after Charlie Brown. The timing was perfect - the post-war generation, at the height of the Baby Boom, embraced the perennial troublemaker and turned Dennis into a global publishing, merchandising, and multimedia phenomemon with over 50 million book collections sold, a fondly-remembered television series, theatrical productions, feature films, and more! The strip is still enjoyed by millions every day. This first volume of Hank Ketcham's Complete Dennis the Menace publishes every single panel strip from 1951 and 1952 is one handsome and thick paperback that resembles a Big Little Book on growth hormones!

Patrick McDonnell is a cartoonist best known for his newspaper strip Mutts. He won a Caldecott Honor in 2012, and his illustrations have appeared in publications such as Time, Sports Illustrated, and many more.

Starred Review. Before there was Bart Simpson or Crayon Shinchan or Eric Cartman, there was Dennis the Menace, the five-year-old icon of childhood mischief. In this chronological collection of the long-running single panel strip, we see Dennis's skills with mud puddles, firecrackers, frogs and general mayhem developing at a splendid pace. Dennis the Menace stands out for both its chronicling of Baby Boom–generation society, and its highly sophisticated humor. Ketcham's grace and economy of both art and punch line are superb, telling a complete story with a single line of dialogue. For instance, in one panel, Dennis's long-suffering parents sit in a friend's parlor as she calls up the stairs. "Bobby, you don't have to hide any more! They didn't bring Dennis! Bobby, can you hear Mother?" As the strips in this volume come to a close, Ketcham is still introducing his major players—put-upon Mr. Wilson is only a small character, and female foils Margaret and Gina are still in their formative stages. As funny as the gags are, it's the art that captivates. As cartoonist Patrick McDonnell puts it in his intro, "Each meticulously designed panel was a masterpiece of composition." This beautifully produced book will delight for years to come. (Sept.)
Copyright © Reed Business Information, a division of Reed Elsevier Inc. All rights reserved.