Items related to Almost a Revolution 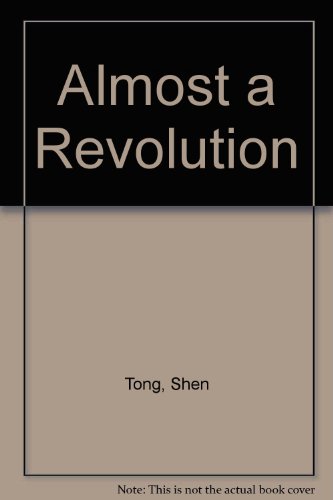 As a leader of the pro-democracy movement. Shen Tong was on Beijing's Avenue of Eternal Peace (now known as "Blood Row") during the Tiananmen Square massacre of 1989. His life was saved by members of his family who pulled him away and took him to a hideaway. He escaped from China one week later and came to the United States.

"Almost a Revolution" is a remarkable behind-the-scenes account of the fateful days when Chinese students courageously demanded that their cries for reform be heard. It is also the story of Shen Tong's life, which reflects the shifting social and political climate in China over the past decade.

Shen Tong was a student leader in China's pro-democracy movement whose dreams were crushed in the Tiananmen Square massacre. Told with modesty and wisdom, written with former Washington Post reporter Yen, his remarkable autobiography is also a spiritual history of China's struggle for human rights. The first half of the book is straightforward, limpid narrative. His parents, reluctant members of the People's Liberation Army, are labeled "counterrevolutionary collaborators" for copying political poems. He discovers Beethoven, Gandhi, Einstein and sexual love. The book's second half is a heartbreaking and electrifying journal of the 1989 Tiananmen Square massacre and the two months of protests leading up to it. Now living near Boston, Shen Tong saw firsthand what others have since confirmed: most of the thousands gunned down on the approaches to the square were not students but workers. No one who cares about modern China should miss this document. Photos. Author tour.
Copyright 1990 Reed Business Information, Inc.