Items related to Say You Love Me (Malory Family Series) 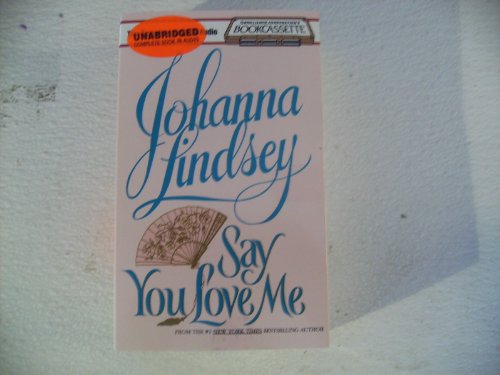 Her parents' death has left Kelsey Langton penniless - and responsible for the well-being of her younger sister, Jean. Kelsey knows that the only way to avert their doom is to allow herself to be sold at auction. Resigned to becoming the plaything of a well-heeled gentleman, she gets more than she bargained for. Lord Derek Malory is the highest bidder - a dashing rakehell from a family of charming London rogues. Enthralled by the lovely young woman with shining eyes and dark hair, he purchases her to be his mistress, unaware of the true worth of his prize. He never imagined that this woman he so frivolously acquired would be blessed with all the attributes he was looking for in a wife - grace, wit, intelligence as well as beauty. He certainly never expected to fall in love.

Her parents' deaths left Kelsey Langton penniless - and responsible for the safety and well-being of her younger sister, Jean. Now circumstance and human frailty have conspired to leave them homeless as well, unless Kelsey can avert the disaster. But she knows only one way to rescue Jean's home, future and honor - and it means sacrificing her own. Kelsey must allow herself to be sold at auction. With fear and trepidation she enters the House of Eros - resigned to becoming the plaything of some well-heeled gentleman. And Lord Derek Malory is the highest bidder - a dashing rakehell from a family of charming London rogues. Enchanted by the stunning, dark-haired maid with flashing bright eyes, he purchases her for his mistress - and sweeps Kelsey into a world of astonishing family secrets, perilous rivalries and unconventional loyalties. But Lord Derek is unaware of the true worth of the prize he has so frivolously acquired - never imagining that the proud, spirited miss is a highborn lady blessed with grace, wit and intelligence as well as beauty. And he certainly never expected that he would fall in love with her.

Johanna Lindsey is one of the most popular authors of romantic fiction, with over sixty million copies of her novels sold. World renowned for her novels of “first-rate romance” (New York Daily News), Lindsey is the author of forty-three previous bestselling novels, many of which have been #1 New York Times bestsellers. Lindsey lives in Maine with her family.