Items related to My Life and Death by Alexandra Canarsie

O'Keefe, Susan Heyboer My Life and Death by Alexandra Canarsie

My Life and Death by Alexandra Canarsie 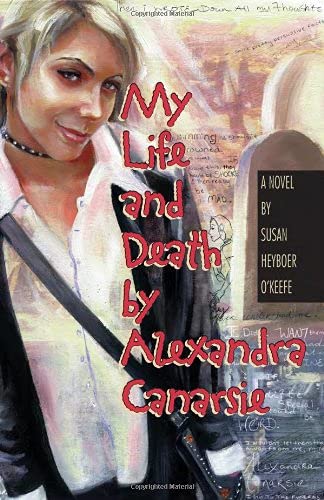 Everything in fourteen-year-old Allie Canarsie’s life has gone wrong until she finds meaning investigating the circumstances behind a young boy’s unexpected death.
The new town, Nickel Park, where Allie has moved with her mother is a big disappointment. The rented trailer where they live now is cramped and depressing. School is a place to waste time and get in trouble, and friends are nonexistent. Worst of all, she has not heard from her father since he walked out on the family. Feeling cut off from those around her, Allie finds herself drawn to the funerals of strangers. Here among the black-clad, sad-eyed anonymous mourners she feels a sense of belonging.
But Allie’s strange new hobby takes an ominous turn when she becomes preoccupied with the death―and former life―of an adolescent boy named Jimmy Muller. Soon she becomes entangled in the lives of Jimmy’s best friend Dennis and Mr. Muller, the dead boy’s father. Allie’s determination to prove that Jimmy’s death was no accident sets into a motion a chain of events that forever alters her life. As she solves the troubling puzzle of Jimmy’s death, she finds some surprising answers to questions in her own life.
In this provocative and affecting novel for young adults, author Susan Heyboer O’Keefe gives voice to adolescent expressions of isolation and confusion that will resonate with young readers.

FIFTEEN-YEAR-OL ALLIE CANARSIE HAS BEEN CALLED A LOT OF THINGS IN HER SHROT LIFE. THE STUDENT FROM HELL. THE POSTER GIRL FOR POOR IMPULSE CONTROL. OH, AND LET'S NOT FORGET MORBID AND INTRUSIVE. WHY? JUST BECAUSE SHE CONSTRUCTS ELABORATTE IMAGINARY LIVES FOR EVERYONE SHE MEETS? JUST BECAUSE SHE HAS ENOUGH CUT SLIPS TO START A RECYCLING PLANT? OR BECAUSE SHE ATTENDS THE FUNERALS OF STRANGERS? ALLIE FEELS HER ATTITUDE IS TOTALLY JUSTIFIED. HER NEW TOWN IS A BIG DISSAPPOINTMENT. THE RUNDOWN TRAILER SHE SHARES WITH HER MOTHER IS CRAMPED AND DEPRESSING. SCHOOL IS JUST A PLACE TO WASTE TIME, AND HER COCIAL LIFE IS NONEXISTENT. WORST OF ALL, ALLIE HASN'T HEARD FROM HER FATHER IN YEARS. ALMOST BEYOND HER WILL, ALLIE IS DRAWN TO THESECRET, SILENT WORLD OF NEARBY EVERGREEN CEMETERY. THERE AMONG THE BLACK-CLAD, SAD-EVED ANONYMOUS MOURNERS SHE FEELS AN ODD SENSE OF BELONGING. BUT ALLIE'S STRANGE NEW HOBBY TAKES AN OMINOUS TURN WHEN SHE BECOMES PREOCCUPIED WITH THE DEATH OF, AND FORMER LIFE, OF YOUNG JIMMY MULLER. AS SHE TRIES TO SOLVE THE TROUBLING PUZZLE OF JIMMY'S DEATH, SHE FINDS SOME SURPRISING ANSWERS TO QUESTIONS IN HER OWN LIFE.

The Falcons have a problem: they've lost the first two games of the season. Although they have skill, they lack height. Then they learn about the UCLA Bruins who won the 1964 NCAA Championship with a full-court zone press used to compensate for a short team. Will the Falcons be able to win a game against the much bigger eighth-grade team?

1. My Life and Death by Alexandra Canarsie

Book Description Peachtree Publishing Company Inc. Hardcover. Condition: Very Good. A copy that has been read, but remains in excellent condition. Pages are intact and are not marred by notes or highlighting, but may contain a neat previous owner name. The spine remains undamaged. At ThriftBooks, our motto is: Read More, Spend Less. Seller Inventory # G1561452645I4N00

2. My Life and Death, by Alexandra Canarsie

3. My Life and Death, by Alexandra Canarsie

4. My Life and Death, by Alexandra Canarsie

5. My Life and Death by Alexandra Canarsie

Book Description Peachtree Publishing Company. Hardcover. Condition: Very Good. 1561452645 Has moderate shelf and/or corner wear. Great used condition. A portion of your purchase of this book will be donated to non-profit organizations. Over 1,000,000 satisfied customers since 1997! We ship daily M-F. Choose expedited shipping (if available) for much faster delivery. Delivery confirmation on all US orders. Seller Inventory # Z1561452645Z2

6. My Life and Death, by Alexandra Canarsie (Signed)