Items related to Lamb in His Bosom (Modern Southern Classics) 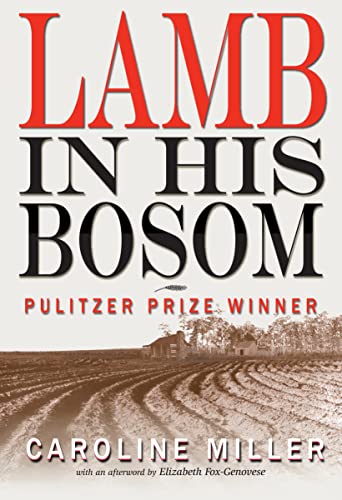 This 1934 Pulitzer Prize winner tells the story of a pair of young newlyweds in antebellum rural Georgia.
The Pulitzer Prize-winner Lamb in His Bosom tells the story of Cean and Lonzo, a young couple who begin their married lives two decades before the Civil War in a land where nature is hostile, the seasons dictate the law, and the days are punctuated by the hard work of the land. Cean and Lonzo’s only wealth is their hands, their obstinacy, and their love. By the time Cean is forty-three, she has borne fourteen children, buried five of them and her husband, and survived civil war, a venomous snakebite, a ferocious panther attack, and a deadly house fire. Neither life, nor the din of history has spared her. More than just a war history, author Caroline Miller’s quietly lyrical prose style pays poignant tribute to a woman’s life lived close to nature.

Raymond and Nelda are the best of friends. But one day, Nelda twirls for Raymond and falls down. Raymond laughs at her. Now the two aren't speaking. But life isn't nearly as much fun without a best friend to share it with.

Caroline Miller was born in 1903. After her marriage, she began traveling through rural south Georgia, interviewing the people she met and planning a novel; as she had not attended college, her husband taught her about literature. “He was my college,” she said. In 1934, she won the Pulitzer Prize for Literature with Lamb in His Bosom. Her second novel, Lebanon, was published in 1944. Miller passed away in 1992.

1. Lamb in His Bosom (Paperback or Softback)

7. Lamb in His Bosom (Paperback)

Book Description Paperback. Condition: New. Paperback. Shipping may be from multiple locations in the US or from the UK, depending on stock availability. 369 pages. 0.472. Seller Inventory # 9781561456017

9. Lamb in His Bosom