Items related to Rumkowski and the Orphans of Lodz

Eichengreen, Lucille Rumkowski and the Orphans of Lodz

Rumkowski and the Orphans of Lodz 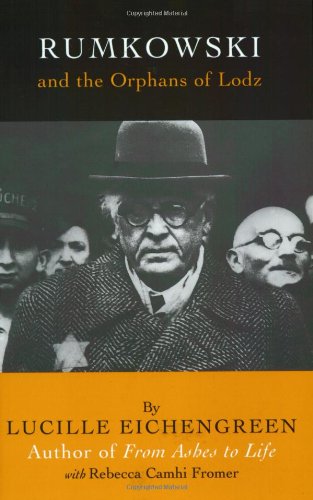 Literary Nonficiton. Jewish Studies. With Rebecca Fromer. RUMKOWSKI AND THE ORPHANS OF ŁÓDŹ is a chilling account of a young woman's experiences in the notorious Łódź Ghetto. The ghetto was lorded over by Chaim Rumkowski, Nazi-appointed Jewish Elder of Łódź and former head of the orphanage. Many have long hailed Rumkowski as a hero who did the best he could leading his community through the worst of circumstances. Now Lucille Eichengreen shares, with firsthand evidence, how Chaim Rumkowski flouted his authority through collaboration, corruption, and the abuse of its children.

Lucille Eichengreen was born Cecilia Landau in Hamburg, Germany, in 1925. A survivor of the Łódź Ghetto and Auschwitz, Neuengamme, and Bergen-Belsen concentration camps, she came to New York in 1946. Now retired and living in Berkeley, California, she writes and speaks on the Holocaust at schools and universities.

Eichengreen (From Ashes to Life, 1994) and Camhi Fromer (The House By the Sea, 1998) are individually responsible for two of the better recent Holocaust books; what would happen if they collaborated? Eichengreen returns to the story of her own life in this volume, elaborating on one of the worst periods of the war years as she recalls the experience of the Lodz ghetto, with particular attention to Chaim Rumkowski, the Nazi-appointed ``Elder'' of the ghetto. Rumkowski was the head of a major Jewish orphanage before the outbreak of war and, as the 16-year-old Eichengreen quickly learned from friends in the ghetto, had used his position to sexually abuse several of the children in his care. Confined with thousands of other Jews in the increasingly unhealthy, overcrowded, and grim ghetto, living in a small apartment with a half-dozen people, Eichengreen struggles to survive on the woefully inadequate food rations. Her mother dies, virtually from starvation, and her younger sister becomes increasingly listless from hunger and the emotional brutality of their circumstances, eventually being taken away on one of the many transports to the death camps. Left alone, Eichengreen finally meets the feared and loathed Rumkowski face to face, and finds herself added to a list of his potential ``conquests.'' What makes this story almost unbearable reading is the idea that people who are suffering such great deprivation and abuse should be subjected to a final humiliation. As Eichengreen says, ``We had all become accustomed to the privation in the ghetto, but [Rumkowski] was insufferable.'' Regrettably, despite their previous track records, Eichengreen and Camhi Fromer fall short of their previous work here. The writing is turgid and overheated; the reported dialogue all sounds like the work of a B movie writeralthough Camhi Fromer's Afterword is useful and well-written, putting the history of the ghettoes into a larger context. Important as an illustration of the corruption and heartlessness of those Jews who willingly helped the Nazis, but disappointing as a work of literature or historical writing. -- Copyright ©1999, Kirkus Associates, LP. All rights reserved.

1. Rumkowski : And the Orphans of Lodz

Book Description Mercury House. Condition: BRAND NEW. BRAND NEW Softcover - 125pp - Chaim Rumkowski, the Nazi-appointed head of the Jewish Council in the Lodz Ghetto, had absolute authority over selections and deportations. He also used his power to molest children in the Lodz orphanage and outside. This quiet, devastating memoir by a Holocaust survivor documents her own abuse by Rumkowski and the accounts she heard from many others who suffered at his hands. A Brand New Quality Book from a Full-Time Veteran Owned Bookshop in business since 1992!. Seller Inventory # 630053

2. Rumkowski and the Orphans of Lodz

3. Rumkowski and the Orphans of Lodz

4. Rumkowski & the Orphans of Lodz

5. Rumkowski & the Orphans of Lodz

6. Rumkowski and the Orphans of Lodz

7. Rumkowski and the Orphans of Lodz [Paperback] Eichengreen, Lucille

8. Rumkowski and the Orphans of Lodz [Paperback] Eichengreen, Lucille