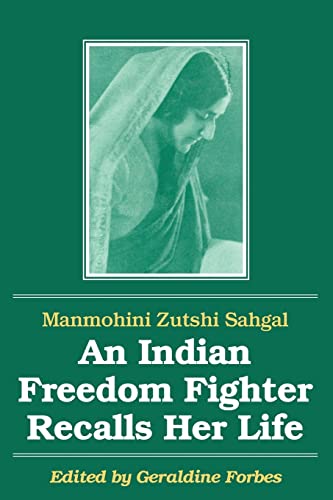 Manmohini, a member of the family of Motilal Nehru, father of Jawaharlal Nehru and grandfather of Indira Gandhi, recalls her life, including her years in the anti-British campaign, her prison terms, her marriage and family, and her work in women's organizations and politics.

A member of Jawaharlal Nehru's extended family, Sahgal's father grew up in Nehru's childhood home. Without this influential though tangential association, it is doubtful her memoir would have more than routine interest. Sahgal was an active participant in India's struggle for independence, but her emotionless story proves her a flawed observer, unable or unwilling to convey any feeling for the characters or events she witnessed. A leader in student politics during her college years, Sahgal followed her mother and sisters in brief prison terms for demonstrating against the Raj. Between 1930 and 1935, Sahgal finished college, became a teacher and was a member of the revolutionary Congress Party. In 1935, she married a a government bureaucrat and, she explains, had to give up politics as well as active association with her old friends. Her story loses steam as she describes following her husband to various posts, supervising a growing household. With her husband's permission, Sahgal joined various ladies clubs and volunteer welfare organizations: as a member of the Catering Advisory Committee for the North Eastern Railway, she investigated charges against crooked vendors at train stations. She did run for public office, but lost, blaming her defeat on Nehru's unwillingness to support her. Part of the Foremother Legacies series about Third World women, it is difficult to imagine why anyone outside of specialists in Indian political history will find this of particular interest. Photos.
Copyright 1994 Reed Business Information, Inc.

Sahgal, a distant relative of Jawaharlal Nehru, provides a memoir of her rich and colorful life that serves as an alternative to the stereotype of the repressed Indian woman. Born in 1909 to a progressive family, Sahgal received an advanced education. She went on to participate actively in the freedom movement and was a follower of Gandhi's satyagraha (nonviolent protest) philosophy. She was imprisoned three times for her involvement in protests against the British. After her marriage in 1935, she taught school and worked intensely for labor and welfare organizations. Currently, at age 84, she is supervising the building of a working women's hostel in New Delhi. Sahgal's diary provides a useful perspective on women's history in India. Unfortunately, her rambling style is difficult to follow. Recommended for comprehensive collections on South Asia and women's studies.
Kathryn Moore Crowe, Univ. of North Carolina Lib., Greensboro
Copyright 1994 Reed Business Information, Inc.

7. An Indian Freedom Fighter Recalls Her Life (Foremother Legacies : Autobiographies and Memoirs of Women from Asia, Africa, the Middle East, and Latin)