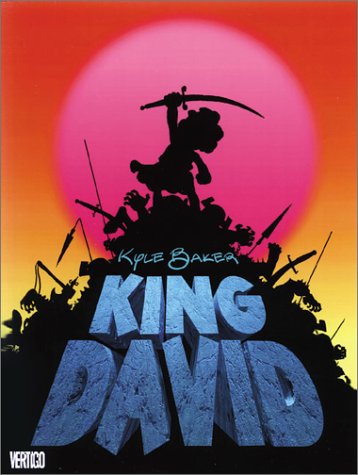 Retells the story of King David from his defeat of the giant Goliath when he was a child to his covetous desire for the beautiful Bathsheba.

The story of David and Goliath has a ring of inevitability about it that handicaps most attempts at retelling. But Kyle Baker's comic book version of King David renders that classic confrontation in 17 wordless pages, comprising one of the freshest, most suspenseful and thrilling descriptions of its subject that you are likely to find. King David is a biblically accurate, freewheeling, color-saturated biography of the boy who rose to become king of Israel. David begins the book as a scruffy Dennis-the-Menace-like kid and ends the book as a vain, hunky womanizer; King Saul is a glam-rock tyrant; his son Jonathan is a skinny punk rebel. (When he asks to borrow Saul's chariot and the king asks, "Where are you going, Jonathan?" he shoots back, "Out.") Many parents will deem the book's bloody battle scenes inappropriate for young readers. King David's candor, however, is a virtue. This is real religious literature: it describes David's relationship with God in a style that's fully alive for readers today. --Paul Power

Baker, the author of at least two graphic novel cult classics-Why I Hate Saturn and The Cowboy Wally Show-combines gag-a-minute, pie-in-the face humor with formidable drafting chops right out of the Disney cartoon virtuoso handbook for this new book. It's a retelling of the story of David of Israel, who is recast as a decent guy, devoted both to God and to the crazy, homicidal King Saul. Baker's young David is a smart-mouthed, harp-playing 11th century B.C. shepherd, who causes a ruckus and takes down names whenever he thinks the living God of Israel isn't getting proper respect. After David takes out Goliath, in a visually dynamic and hilarious sequence of comic carnage, nutty King Saul realizes this kid could be a threat. But David is both lucky and good, and as the scriptures remind us, Saul fails time and again to kill him before the pious but dim David realizes what Saul is up to. Baker's treatment of the biblical story is funny and irreverent, and Bible study has never been so hip. But the book's pace and wisecracks slow to a crawl by the end, and Baker starts to rely more on the scriptural text than his own zany wit. The artwork, a combination of hand illustration and computer manipulation, is absurdly rich in color and detail-as if this were a pitch for a big-budget animated film-while at times rendered in a brisk and cursory line. Baker has produced an engaging comic adaptation of a classic tale.
Copyright 2002 Reed Business Information, Inc.