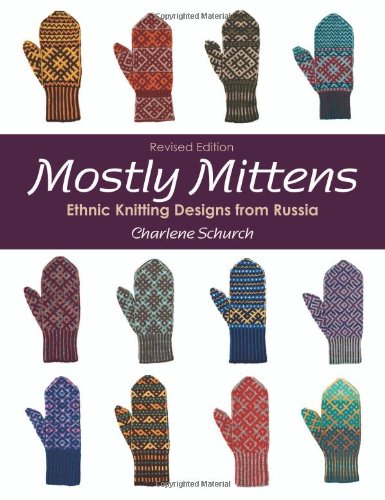 Developed by Russia's Komi people, these patterns were originally passed down visually from knit pieces, so they're easy to understand and knit. They only look complex! This updated version of Charlene Schurch's previous collection includes her original designs plus new versions of several mittens.

Charlene Schurch is the author of a growing number of knitting books and numerous magazine articles about knitting and spinning. Her articles have appeared in Vogue Knitting, Knitters, Interweave Knits, Piecework, and SpinOff. She divides her time between Connecticut and Florida.

If you're looking for something different in mittens, check out Charlene Schurch's Mostly Mittens: Ethnic Knitting Designs from Russia (Martingale & Company, 2009). This is a revised edition of the book originally published in 1998; errors have been corrected and hat patterns have been added. The patterns were inspired by Schurch's discovery of patterns in the clothing of the Komi people. The Komi are people who live west of the Urals and close to the Arctic Circle. A recognized Russian minority, Komi heritage can be traced to the Finns and Estonians.
The patterns may remind knitters somewhat of Latvian designs. They are colorful and geometric. They can be complex or relatively simple.
After a brief history of the Komi, Schurch provides basic guidelines for knitting mittens. She provides readers with guidelines for selecting yarn and needles, how to measure gauge, and how to cast on and begin to knit in the round. Multiple cuff styles are described. This is followed by an explanation on how to read charts. There are 35 mitten patterns included in the book. Each project includes 2 thumb sizes, medium and large, for ease in knitting mittens for most of those on your must knit-for list.
In addition to the mittens, there are 4 cap projects. Schurch also tells you how to adapt the mitten stitch/color patterns for sweaters and how to use the pattern of your choice to design a cap. The patterns are written for DPNs, but she does tell you how to adapt them for knitting on 2 circular needles. She does not mention using the Magic Loop method of circular knitting, but I don't see any reason why it couldn't be used. The projects can also be knit flat and seamed.
I've generally advised knitters not to put too much emphasis on the skill levels indicated on patterns. In this case, however, I'd recommend that you've knit at least 1 pair before taking on these. That way, you'll be familiar with the basic structure and knitting of mittens. Included in the book are instructions for the basic mitten. Though the pattern refers to knitting from the chart, there's no reason why you couldn't knit them in a single color, stockinette, and get the feel for the mitten-knitting process.
Knitters will refer to the previously mentioned basic mitten pattern throughout the book, as the instructions for the individual mittens assume you're familiar with the process. The charts are large enough to read and easy to follow.
If you're a mitten or cap knitter, or if you're interested in ethnic knitting, Mostly Mittens: Ethnic Knitting Designs from Russia will be a nice addition to your library. And the resulting projects will be a colorful and impressive addition to your knitting repertoire. --Ida Walker, knit-a-while.com

Sometimes a knitting book comes along that you just have to have. Sometimes it's the pretty pictures, or because you saw someone else on Ravelry had knit something out of it, or sometimes you just need the book because you have recently developed an obsession for wanting to knit things like what can be found in the book.

This book was originally published in 1998. From what I can gather it must have gone out of print, because that original publishing is available on Amazon for $72!

Mostly Mittens is a book that specifically focuses on the ethnic knitting designs from Russia (hence the subtitle). More specifically, it focuses on those of the Komi people, a group of people who settled in the northeast part of Russia near the Arctic Circle in about 1700 (according to the book).

This book does a very good job of going into the history of the Komi, their knitting and their influence on knitting traditions. It also discusses the Komi patterns and what the characteristics of these patterns are. I actually really enjoyed this part of the book. I knew from looking at the patterns that things looked a little different than other Fair Isle mittens I have seen. Something about the geometry of the patterns is different. I really liked that there was explanation for this in the book. I don't normally care a lot about the history of knitting (which maybe is bad of me, but usually I am more concerned with the question of "is it pretty?" instead of "how did it come to be?"), but this time I was glad it was there.

But let's get into what everyone really cares about: the patterns! The book is broken down into six sections based on the type of mitten (from Basic Mittens all the way to Complex Borders, and even a few hat patterns made their way into the book). Each pattern has a full color picture of the mitten and then the usual yarn, gauge, needle size info. After that is a brief written instruction for the cuff and then goes straight into the colorwork of the mitten. The chart for the hand and thumb is in the book in landscape format, which makes it very easy to read (no flipping over pages back and forth, all the charts are on one page).

I would recommend this book to an intermediate knitter. If you hate charts, then you need to steer clear of this book. The book is pretty much all charts. But, if you are a lover of knitting charts then I think you might like this book. I would say this book is best suited for someone who has knitted some kind of Fair Isle before and loves those charts. Sounds like a book for me! --Jennifer Hansen, knittinglikecrazy.com

Mostly Mittens starts off with a very interesting (brief) summary of the history of the Komi people, why they knit in the fair isle style, how the patterns came around, and lots of very interesting history about this fantastic art. The book is basically all knitting graphs. A knitting graph is like graph paper with squares filled in to represent which stitch is knit in which color. There are basic instructions at the beginning of the book, then each pattern gives the tools needed and the graph, but the basic instructions are the same for all of them.

The patterns are all unique and intricate, but very easy to follow once you understand what you're doing. Fair Isle is very relaxing and fun, not to mention warm since the extra threads add a second, third, and at times a fourth layer of warmth to the mittens.

Many knitting books try to teach people how to knit, or try to offer pictures and explanations of certain more advanced stitches in knitting. This one does not--and it's something I appreciate. The book is aimed for the educated knitter who knows how to use double-pointed needles, read a pattern, and understand the difference between an inc 1 and a M1, etc. It's nice to read a book that is aimed for the level I'm at, rather than one that tries to take a brand-new knitter and make them a pro overnight. There is a list of abbreviations in the back, because all knitters abbreviate slightly different. There's also a list of resources in the back.

My only complaint is that the basic instructions aren't written in a very clear manner, nor are the instructions for the knit-on cast-on. Luckily the photos and drawings are wonderful, and you can pretty much understand the concept. Plus, if you're using this book, you are already pretty experienced.

Recommendation: intermediate to experienced knitters who don't mind using small needles. No size 15 for these! Size 0-3 are the ones you'll use. --Haleyknitz blog

Shipping: US$ 29.86
From United Kingdom to U.S.A.
Destination, rates & speeds