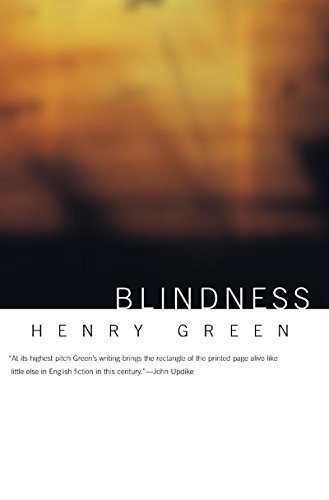 Blinded in an accident on his way home from boarding school, John Haye must reevaluate his life and the possibilities for his future. His stepmother―worried that, blind and dependent, he’ll spend his life with her―wants to marry him off to anyone who will take him, provided she’s of the “right” social class. Contrary to her hopes, John falls in love with the daughter of the town drunk (who is also the town parson). She whisks John off to London, where in this strange city he is confined to a room above a major thoroughfare while she gets on with her life.

Blindness was first published when Henry Green was an undergraduate at Oxford. Highly praised as a master of high-modernism, Green went on to write eight other novels, including Concluding and Doting.

Henry Green's ability to expose the hypocrisy of the British middle class through the deflections and half-truths of their speech has made him one of the most admired and imitated of the high-modernists, garnering praise from the likes of W.H. Auden, Eudora Welty, Anthony Burgess and John Updike.

Henry Green was the pen name of Henry Vincent Yorke. He was born in 1905 at the family home of his parents, near Tewkesbury in Gloucestershire, England, and was educated at Eton and Oxford. He worked at the family engineering firm for most of his life and pursued a parallel career as a novelist. He married in 1928 and had one son. During WWII he served in the London Fire Brigade. He died in December 1973.