Items related to Diary of a Blood Donor

Diary of a Blood Donor 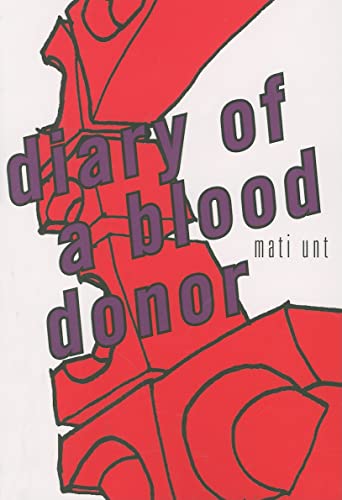 In this contemporary retelling of Bram Stoker’s Dracula, Estonian writer Mati Unt offers a playful yet unsettling mixture of fact and fiction, combining pieces of Estonian political history―in particular the figure of Lydia Koidula (1843-1886), widely regarded as the first Estonian woman to express an Estonian longing for independence―with portraits of life in contemporary Estonia, all set against a backdrop of vampirism and the Gothic novel.

Mati Unt (1944-2005) was an Estonian writer who began his writing career at the age of nineteen, with a "naive novel" entitled Good-bye, Yellow Cat. From this early beginning, Unt established a broad reputation in the artistic and intellectual circles of Estonia as a writer of fiction, plays, and criticism. His novels The Debt, On the Existence of Life in Outer Space, Murder in a Hotel, The Autumn Ball, and Things in the Night, among others, established Unt as one of the most prolific and well-regarded novelists in Estonia. In addition to his own writing, he was instrumental in bringing avant-garde theater to post-Soviet Estonia, and was well known as a director.

Estonian novelist Unt (1944–2005) gets a bang out of remixing Dracula as a postmodern fable and a metaphor for postcommunist life. A writer receives a summons to meet a stranger in Leningrad, and, after much internal strife, he decides to go. Once the writer is in the city, the novel is thrust into an underworld of vampires, blood suckers and superstition. Unt fills the novel with amusing asides and comments, indicating his awareness of the thinness of his plot. He clearly prefers narrative playfulness to straightforward storytelling here, and though the novel is a bit of a chore to get through, hints of vampirism as a powerful metaphor for communism and postcommunist upheaval are sprinkled throughout like allegorical Easter eggs. (May)
Copyright © Reed Business Information, a division of Reed Elsevier Inc. All rights reserved.

1. Diary of a Blood Donor (Paperback or Softback)

2. Diary of a Blood Donor

3. Diary Of A Blood Donor

4. Diary of a Blood Donor (Hardback)

5. Diary of a Blood Donor (Hardback)

6. Diary of a Blood Donor (Paperback)

Book Description Paperback. Condition: New. Paperback. A Blasphemous Postmodern Tale of Vampires. In 1990, the same year as Things in the Night, Unt published a second novel, Diary of a Blood Donor, which displays the usual Untian mixture of f.Shipping may be from multiple locations in the US or from the UK, depending on stock availability. 212 pages. 0.281. Seller Inventory # 9781564784964

7. Diary of a Blood Donor (Hardback)

8. Diary of a Blood Donor

9. Diary of a Blood Donor