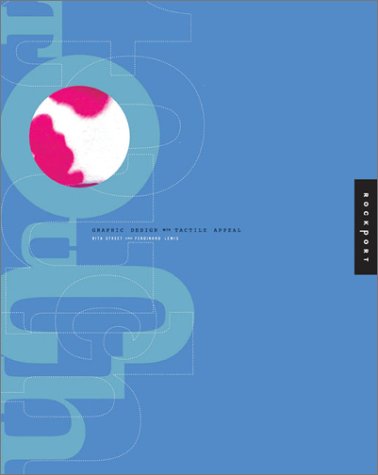 Touch Graphics examines a wide array of innovative and often experimental graphic design pieces that have incorporated imaginative materials like fur, velvet, plastic, and metal to convey powerful messages and connect with audiences on a deeper level. Tactile designs feed our most neglected sense in a digital world that focuses aggressively on visual and audio stimulation and the authors celebrate and showcase the remarkable power they have to engender wonder, excitement, and a sense of ownership in today's consumers. An invaluable idea book and resource, this stimulating collection will inspire designers to open their minds-and their art-to include new forms and shapes, and insightful text will tell the reader the technical hurtles (if any) that were apart of the design process.

His plays have been performed on both coasts and in Europe, and his experimental writing has appeared in Parabas is: The Journal of A.S.K. Theatre Projects. He is working on a pair of books about ensemble theatre, Ensemble Works: An Anthology for Theatre Communications Group Publishers, and Ensemble Works: Traditions, Approaches, Strategies, which is supported by the Flintridge Foundation.

Since 1991, Rita Street has written about entertainment, entertainment technology, and the graphic arts for various publications in the U.S., U.K., and Asia. She is the former editor of Animation and Film & Video magazines. Other Rockport titles authored by Street include Computer Animation: A Whole New World, and Creative Newsletters & Annual Reports: Designing Information. She is the founder of the international organization, Women In Animation.

There’s a new artist running around our office, and we have him to thank for our interest in tactile graphics. Although his focus—like that of many graphics professionals—lies mainly in 2-D, when he really wants to make an impact he adds a touchable element to his design. For instance, the January page of his most recent calendar featured a snowman made from flour paste, and his cardboard celebration of Groundhog Day sported a pop-up rodent and real dirt.

His best tactile graphic, though, is The Flat Stuff Holder—An 8.5’ x 11(22 cm x 28 cm) piece of cardstock folded lengthwise, illuminated by totemic drawings, with hand-scissored slots along the spine. Even though Caleb is only seven, he recognized the trouble we have wrangling the dozens of business cards that collect on our desks. So he made this ‘holder for all that flat stuff’ as a utilitarian self-promo, knowing that every time we reached for it we’d think of him. What Caleb didn’t know is that his work would cause us to examine the very idea of tactility and its ability to promote an idea, product or event.

Poking our noses into studios around North America and Europe, we soon realized that—first graders notwithstanding—tactile graphics are the exception rather than the rule. For practical reasons, few designers can allow tactile work to lead their aesthetic—corporate clients are often intimidated by that unruly third dimension of tactility, and tactile pieces are sometimes hard to produce in quantity. In most cases, tactility appears only when conditions are right, and those conditions vary wildly. Still, tactility is graphic design’s trump card, and tactile designs often become the most prominent pieces in a portfolio.

Having collected a cross section of current tactile graphics ranging from a rubber media kit to inflatable packaging to an aluminum postcard, we began to wonder where this genre might be headed in the near future. MIT’s Touch Lab kindly introduced us to the science of haptics, which not only maps the neurology of touch, but is also developing technology that allows us to feel digital objects and textures. It seems inevitable that an entire haptic language will one day enter design nomenclature, which could provide an eye + hand interaction more satisfying than has heretofore been possible. The final section of this book is a roundup of the current work in haptics as it applies to digital graphic design.

The digital future may be mind-blowing, but what inspired us the most is the plain old sense of fun that designers get out of creating high-touch graphics. Joy-in-making translates into joy-in-using, which pretty much describes the spirit of tactile design.

Of course, our little in-house designer has been showing us that all along. We’re definitely going to give him a raise.