Items related to New Stories from the South 1992: The Year's Best

Ravenel, Shannon New Stories from the South 1992: The Year's Best

New Stories from the South 1992: The Year's Best 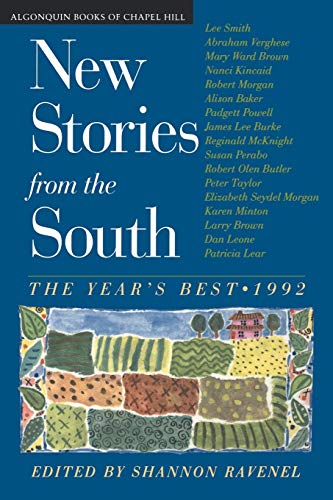 Now that this excellent series is firmly established among must-read annuals, Ravenel should skip the apologetic introductions in which she repeatedly tries to justify the regional basis for her anthology. The evidence speaks for itself here--16 stories by or about southerners that embrace a wide range of literary and geographical experience. Many of the stories focus on coming-of-age in the South, from Nanci Kincaid's teenage girls hanging out at a Tallahassee movie theater (``This is Not the Picture Show'') to Jill McCorkle's shy young girl who lives vicariously through the postcards form her wild, older sister (``Waiting for the Hard Times to End''). Young people deal with domestic tragedy in Barbara Hudson's ``The Arabesque,'' the story of two sisters confronted by their mother's madness and early death; in Rick Bass's ``In the Loyal Mountains,'' a beautifully written profile of the narrator's big-spending Texan uncle who commits suicide rather than suffer the consequences of his shady business dealings; and in Reynolds Price's overwrought ``His Final Mother,'' a boy's meditation on his mother's sudden death. Lee Smith's ``Intensive Care,'' the story of a former high-school nerd who pursues an improbable passion, confronts death with a healthy dose of schmaltz. The least convincing narrative voices here include the successful Vietnamese immigrant in Robert Olen Butler's ``Relic,'' the young grandmother of Bobbie Ann Mason's typically hard-luck ``With Jazz,'' and the drunk and sexually inadequate good old boy of Larry Brown's ``Big Bad Love.'' The strongest pieces range from Mark Richard's hilarious and sad tale of boys in an orphanage hospital on Christmas Eve (``The Birds for Christmas'') to Susan Starr Richards's unusual paean to porch life and the strange bonds of sisters in ``The Screened Porch.'' Robert Morgan's story of a Civil War-era stone mason (``Poinsett's Bridge'') and Thomas Phillips Brewer's riff on southern junkies (``Black Cat Bone'') add an interesting dimension to a somewhat homogeneous volume. Peter Taylor's graceful and evocative ``Cousin Aubrey'' easily earns its lead-off position. Once again, southern fiction mostly at its best. -- Copyright ©1991, Kirkus Associates, LP. All rights reserved.

3. New Stories from the South 1992: The Year's Best (Paperback or Softback)

5. New Stories from the South (Paperback)

8. New Stories from the South (Paperback)

9. New Stories from the South (Paperback)