Items related to Island of the Lost: Shipwrecked At The Edge Of The...

Druett, Joan Island of the Lost: Shipwrecked At The Edge Of The World

Island of the Lost: Shipwrecked At The Edge Of The World 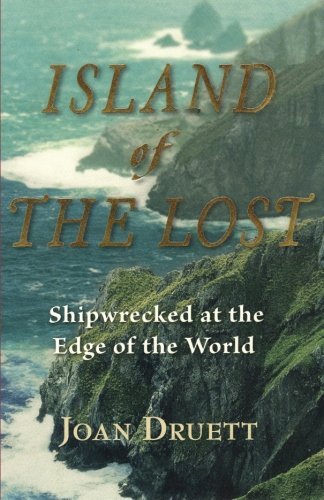 Auckland Island is a godforsaken place in the middle of the Southern Ocean, 285 miles south of New Zealand. With year-round freezing rain and howling winds, it is one of the most forbidding places in the world. To be shipwrecked there means almost certain death.

In 1864 Captain Thomas Musgrave and his crew of four aboard the schooner Grafton wreck on the southern end of the island. Utterly alone in a dense coastal forest, plagued by stinging blowflies and relentless rain, Captain Musgrave—rather than succumb to this dismal fate—inspires his men to take action. With barely more than their bare hands, they build a cabin and, remarkably, a forge, where they manufacture their tools. Under Musgrave's leadership, they band together and remain civilized through even the darkest and most terrifying days.

Incredibly, at the same time on the opposite end of the island—twenty miles of impassable cliffs and chasms away—the Invercauld wrecks during a horrible storm. Nineteen men stagger ashore. Unlike Captain Musgrave, the captain of the Invercauld falls apart given the same dismal circumstances. His men fight and split up; some die of starvation, others turn to cannibalism. Only three survive. Musgrave and all of his men not only endure for nearly two years, they also plan their own astonishing escape, setting off on one of the most courageous sea voyages in history.

Using the survivors' journals and historical records, award-winning maritime historian Joan Druett brings this extraordinary untold story to life, a story about leadership and the fine line between order and chaos.

In the winter of 1864, five seamen aboard the schooner Grafton wreck on the remote and icy Auckland Island, 285 miles south of New Zealand. An isolated speck in the Southern Ocean, it is a godforsaken place, with winds howling at sixty miles an hour, rain three hundred days a year, and an almost impenetrable coastal forest.

Under the leadership of Captain Thomas Musgrave, these men defy their slim chance of survival. With their bare hands they build a cabin and, incredibly, a forge, where they manufacture every single nail as well as most of their tools. Meanwhile, on the opposite end of the same island—twenty miles of impassable cliffs and chasms away—another ship wrecks during a horrible gale. Nineteen men struggle ashore. They succumb to utter anarchy, and only three survive, while all the Grafton men survive for nearly two years before finally building a vessel and setting off on one of the most courageous sea voyages ever. Award-winning maritime historian Joan Druett tells a gripping cautionary tale about leardership, endurance, human ingenuity, and the tenuous line between order and chaos.

Joan Druett is a maritime historian and the award-winning author of several books, including Petticoat Whalers, She Was a Sister Sailor, Hen Frigates, Tupaia, and The Discovery of Tahiti. Her interest in maritime history began in 1984, when she discovered the grave of a young American whaling wife while exploring the tropical island of Rarotonga; she subsequently received a Fulbright fellowship to study whaling wives in Massachusetts, Connecticut, and California. Her ground-breaking work in the field of seafaring women was also recognized with a L. Byrne Waterman Award. She is married to Ron Druett, a maritime artist.

1. Island of the Lost: Shipwrecked at the Edge of the World

2. Island of the Lost: Shipwrecked At The Edge Of The World

3. Island of the Lost: Shipwrecked at the Edge of the World

4. Island of the Lost: Shipwrecked At The Edge Of The World Druett, Joan