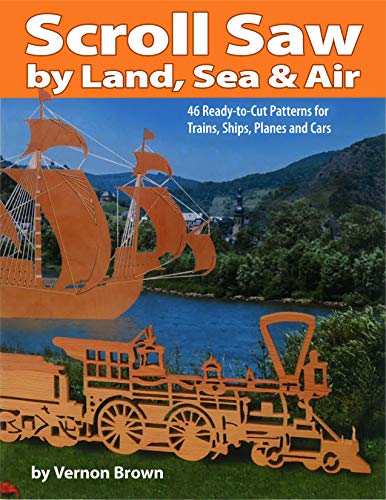 Taking off on a scrolling adventure! 46 travel-worthy scroll saw patterns include:

Model Ts, biplanes, steam engines, a 1932 Alpha Romeo—more than 40 ready-to-cut patterns of historical and contemporary modes of transportation, from old-fashioned locomotives to fighter jets and the Concorde, are offered in this collection!

Scroll Saw Land, Sea, and Air contains a total of 46 ready-to-cut patterns, covers basic cutting and stringing, and includes instructions on altering patterns to include photographs.

These patterns can be used to make scroll saw fretwork plaques or applied to other projects such as picture frames, shelf brackets, or desk sets. In addition, basic scroll saw techniques are explained for beginners.

Whether you prefer fast or slow, grounded or airborne, the wide variety of patterns for helicopters, planes, ships, trains, and cars presented here is sure to please!

Get on the road to a great scroll sawing experience with Scroll Saw Land, Sea, and Air!

Taking off on a Scrolling Adventure!

Inside you'll find 46 scroll saw patterns guaranteed to get you "on the road" to an enjoyable scroll saw experience.

Whether you prefer fast or slow, grounded or airborne, the wide variety of patterns for helicopters, planes, ships, trains and cars presented here is sure to please. Includes 46 ready-to-cut patterns and covers basic cutting and stringing instructions. Also includes instructions on altering patterns to include photographs.

Vernon Brown has been an avid woodworker since his younger days. In 1994, he bought a scroll saw-a purchase that, in his words, "changed his life." The next year, he published the original version of Scroll Saw by Land, Sea & Air and started a new pattern catalog, The Wooden Teddy Bear Collection. Vernon enjoys creating new patterns of intarsia, fretwork, shelves, and clocks, to name a few. All of his pattern can be found in the Wooden Teddy Bear's catalog, which currently contains well over 500 patterns, blades, and other accessories for scrollers. To request a copy of the Wooden Teddy Bear catalog, call (888) 762-9149 or e-mail woodenteddybear@pobox.com. Vernon also maintains a website at woodenteddybear.com.