Items related to Qumran In Context: Reassessing The Archaeological Evidence 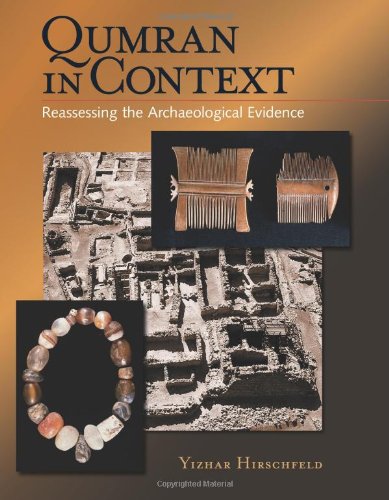 What if the Dead Sea Scrolls were not a product of an Essene Community at Qumran?

In this bold reassessment of the archaeological evidence of Qumran and other nearby first-century sites on the western shore of the Dead Sea, Professor Hirschfeld argues persuasively that Qumran is not the site of an Essene community hitherto thought to be responsible for the Dead Sea Scrolls.

Reassessing and marshalling the evidence (some of which was overlooked in earlier explanations of the site) with the skill of a detective reconstructing the scene of a crime, Hirschfeld reveals that Qumran was not the communal site of an impoverished and ascetic religious group, but the prosperous estate of an influential member of society. Bringing a new understanding to the textual evidence of the archaeology of the site during the Roman period as well as evidence from neighboring archaeological sites, Hirschfeld dramatically illustrates his arguments with more than 135 maps, archaeological drawings and reconstructions, as well as vivid photographs of the archaeological and geographic sites. A masterpiece of argument with lasting impact on our understanding of the origins of the Dead Sea Scrolls, this work will be discussed in academic circles for years to come and will be appreciated by all who are intrigued by the mysteries surrounding the ancient texts associated with Qumran. The implications of this new perspective for the scholarly understanding of the Dead Sea Scrolls are earth-shifting.

"Qumran is a complex and puzzling archaeological site that is generally associated with the Essenes and the Dead Sea Scrolls. Yizhar Hirschfeld, one of Israel’s finest archaeologists, questions many assumptions that would make such an association necessary. By placing Qumran in a regional context Hirschfeld opens up other types of interpretative possibilities, and focuses in particular on the local economy and industries around the Dead Sea. This challenging study impresses by its clarity and methodological soundness. Hirschfeld proves himself adept at providing innovative answers to old questions. He uses his wide knowledge to show interesting parallels, provoking his readers to think about the site as the centre of an estate, as a complex of residential wings and industrial installations that he calls a ‘manor house’, comparable to others in the region. This finely-illustrated and well-argued text will undoubtedly cause much debate and is a welcome addition to Qumran research." —Joan E. Taylor, History Department, University College London.

"Hirschfeld's description of the archeology of Qumran is so different from the influential accounts of de Vaux and Magness that it is sure to be controversial. Even those who are not persuaded by his assertions will appreciate his knowledge of the Judean context and the fine collection of photographs included in this book." —John J. Collins, Holmes Professor of Old Testament, Yale University

Yizhar Hirschfeld is a professor of classical archaeology at the Hebrew University of Jerusalem’s Institute of Archaeology. He has conducted excavations in several major sites in Israel, including Tiberias, En Gedi, Hammat Gader, and Ramat Hanadiv.