Items related to A People's History of the United States: American... 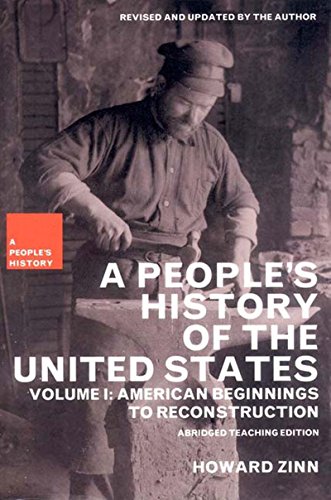 The New Press’s Abridged Teaching Edition of A People’s History of the United States has made Howard Zinn’s original text available specifically for classroom use. With exercises and teaching materials to accompany each chapter, Volume I spans American Beginnings to Reconstruction.

Howard Zinn (1922–2010) was a historian, a playwright, and an activist. He wrote the classic A People’s History of the United States and is a co-author (with Noam Chomsky, Ira Katznelson, R.C. Lewontin, David Montgomery, Laura Nader, Richard Ohmann, Ray Siever, and Immanuel Wallerstein) of The Cold War and the University: Toward an Intellectual History of the Postwar Years (The New Press). He received the Lannan Literary Award for Nonfiction and the Eugene V. Debs Award for his writing and political activism.

"Professor Zinn writes with an enthusiasm rarely encountered in the leaden prose of academic history, and his text is studded with telling quotations from labor leaders, war resisters, and fugitive slaves. There are vivid descriptions of events that are usually ignored ... A reversal of perspectives, a reshuffling of heroes and villains."
—Eric Foner, The New York Times Book Review

"[A] brilliant and moving history of the American people from the point of view of those who have been exploited politically and economically, and whose plight has been largely omitted from most histories."
—Library Journal

PEOPLE'S HIST OF US V1 PA

A People's History of the United States: American Beginnings to Reconstruction (Paperback)

A People's History of the United States: American Beginnings to Reconstruction (Paperback)