Roberts, Robin The Whiz Kids And the 1950 Pennant (Baseball In America)

The Whiz Kids And the 1950 Pennant (Baseball In America) 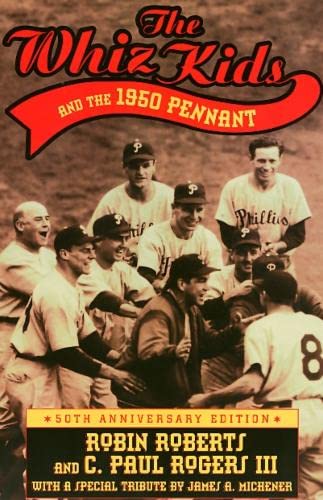 The 1950 Phillies unexpectedly captured the hearts and imaginations of Philadelphians. This work features this inspiring era in Phillies history, with the personal reflections of Robin Roberts, a Hall of Famer and arguably the best right-handed pitcher in Phillies history.

Every generation or so, a team comes along whose march toward victory is so improbable that you can't help but root them along. The 1950 Philadelphia Phillies was that kind of team; young and spirited, the Whiz Kids played a raw, emotional brand of baseball, nipping the Brooklyn Dodgers on the final day of the season to bring the National League's perennial doormat its first title in 35 years. Hall-of-Fame member Robin Roberts, the team's ace starter, peppers his recollections with snippets of oral history from his teammates to produce a book as lively as the team itself.

5. The Whiz Kids And the 1950 Pennant (Baseball In America) Roberts, Robin

6. The Whiz Kids And the 1950 Pennant (Baseball In America) Roberts, Robin