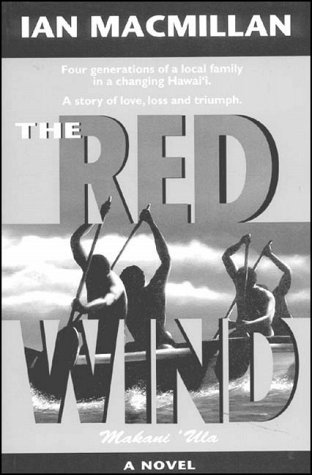 In The Red Wind, Ian MacMillan writes vividly of Hawaiian family life on windward Oahu in postwar Hawaii. The story centers in the poignant irony of Kenika, a haole of unknown parentage and background who adopts the ways of the Hawaiian, becoming a Hawaiian himself and marries into a Hawaiian family. His children, however, move outward into Western American culture. His daughters marry haoles and move to the mainland while his son becomes caught in the drug culture and ultimately loses his Hawaiian identity in homelessness. At the center of the novel is Kenika's learning how to build canoes in the old way, immersing himself in the intricacies of the craft and the religious spirit which attends it. MacMillan takes us into the rich physical and emotional life of his characters in this remarkable novel which transcends four generations and takes us from Hawaii just after World War II to the nineties.

A resident of Hawaii for thirty-seven years, Ian MacMillan is author of five novels and four short story collections, one of which won the Associated Writing Programs Award for Short Fiction. He has made over a hundred appearances in literary and commercial magazines including Yankee, Paris Review, Iowa Review, etc., and his work has been reprinted in Best American Short Stories, Pushcart Prize, and O. Henry Award volumes among other 'best' anthologies. Winner of the 1992 Hawaii Award for Literature, he teaches fiction writing at the University if Hawaii, and is fiction editor of Manoa: A Pacific Journal of International Writing. His most recent novels are The Red Wind (set in Hawaii) from Mutual Publishing, 1998 and Village of a Million Spirits, a Novel of the Treblinka Uprising (the third novel in a World War II trilogy including Proud Monster and Orbit of Darkness), from Steerforth Press and Penguin Books (May 2000), which won the 2000 PEN USA-West Fiction A! ward.