Items related to A People's Guide to the Federal Budget

A People's Guide to the Federal Budget 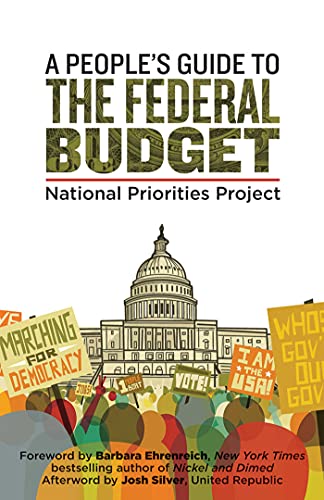 From history of the budget process to detail about the ongoing conflict in Washington, from charts explaining where every federal dollar goes to simple explanations of budget terminology, this book covers it all. A Peoples Guide to the Federal Budget is for every American who wants to understand and participate in a process that affects all of us. It serves as a foundation for the novice reader, a reference tool for a more advanced audience, and is perfect for high school and college classroom use. Released to coincide with the fiscal year 2013 budget process and the 2012 presidential election, this guide includes up-to-the-minute numbers and explanation of President Obama s 2013 budget request.

Mattea Kramer is a senior research analyst at National Priorities Project. Her work has appeared in The Washington Post and The Christian Science Monitor.

National Priorities Project (NPP) is a non-profit research organization that makes our complex federal budget transparent and accessible so people can exercise their right and responsibility to oversee and influence how their tax dollars are spent. Find NPP on-line

Barbara Ehrenreich is the author of fourteen books, including the bestselling Nickel and Dimed, Blood Rites, The Worst Years of Our Lives (a New York Times bestseller) and Fear of Falling, which was nominated for a National Book Critics Circle Award. She is a frequent contributor to Time, Harper's, Esquire, The New Republic, Mirabella, The Nation, and The New York Times Magazine.

Josh Silver is CEO of United Republic, a new, nonpartisan organization challenging the undue influence of well-financed special interests over American politics and government. Silver is a veteran election and media reform executive. He cofounded and served for nine years as president of Free Press, the nation s leading media and technology reform advocacy organization.

"This year the president, the entire House of ­Representatives, and one-third of the Senate are up for re-election.... The officials we elect in November will have the opportunity to reshape our country for years to come. If we're to have any hope of navigating the federal budget process and understanding the complex decisions our elected officials will make in future years, we need this book. A People's Guide to the Federal Budget is our way in."

-from the foreword by Barbara Ehrenreich, best-selling author of Nickel and Dimed
"Many Americans express dissatisfaction or worse over what's happening in Washington today... they can't understand much of what's going on, especially when it comes to where our tax dollars go. This book is a bridge for Americans from dissatisfaction and confusion to knowledge and action.... Congresswoman Barbara Jordan said: 'If you're going to play the game properly you'd better know every rule.' That's what makes A People's Guide essential. We've got to understand what's going on in Washington so that we can work together and change the rules, so that our elections are not auctions.... All Americans who hope to make their voices heard in Washington must understand that we must take on the issue of money in politics, and play to win."

-from the afterword by Josh Silver, CEO of United Republic
"Nothing will change in Washington unless the American people demand it. A People's Guide to the Federal Budget empowers Americans by explaining the inside-Washington game and offering tools to hold lawmakers accountable."

-Robert Reich, Secretary of Labor in the Clinton Administration and best-selling author of Aftershock and The Work of Nations


“Given the fateful budget choices we now face as a country, A People's Guide to the Federal Budget crucially helps all citizens understand the process by which those choices will be made and how we can all engage to ensure the best possible outcome.”

-Anthony W. Marx, President, New York Public Library
"Young adults are underrepresented at the polls. That would begin to change if high school curricula provided a strong grounding in the federal budget-- so that young people have the tools to base their judgments on evidence. A People's Guide to the Federal Budget is an invaluable resource."


"Kramer (senior research analyst, National Priorities Project) here provides an understandable explanation of federal spending and revenues. The text explains why readers should care about the federal budget and how it affects them.... This book is worthwhile reading for all U.S. citizens."


“This guide seeks to inform general readers and high school and college students about the federal budget to make them more active citizens. It explains the budget's terminology and language, its history, its decision makers, where the money comes from and how it is allocated, the federal debt, and how to take action.”

“This primer on the complicated federal budget process is offered in readily understandable language for all readers.... The book clearly addresses such issues as discretionary spending ... and the federal debt. In the foreword, Ehrenreich reflects on the challenges people face in trying to make ends meet.... This is a valuable resource.”

1. A People's Guide to the Federal Budget

2. A People's Guide to the Federal Budget

3. A PEOPLE'S GUIDE TO THE FEDERAL