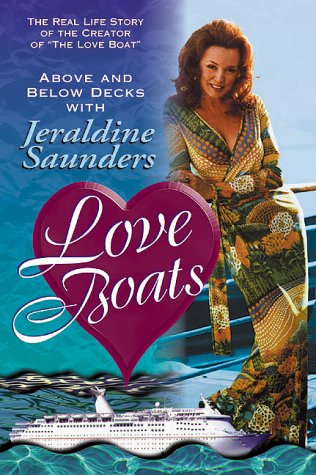 Get the inside information on the mammoth cruise ships as you laugh and cry through the autobiography of the woman who made it popular, Jeraldine Saunders, in Love Boats (revised and expanded version of The Love Boats).

This is the book that started the TV series, "The Love Boat," one of the most popular shows in history. That series was full of episodes of humor and pathos, but this book outdoes them all―the amazing stories here are true.

Over the years, Ms. Saunders became an international sensation, from being a model for designers such as Mr. Blackwell to accompanying famous stars to public events. She learned palmistry, graphology, numerology and astrology. Then she went to sea.

Jeraldine Saunders became the first female cruise director and held this position for a decade. She wrote her experiences in the first edition of this book and came up with the idea for the TV series. The new edition of Love Boats expands on the original, making it even better.

Read about her experiences:

·Mistaking a seaport for the name of a cabin creates a funny but frightful misunderstanding with Mario
·The disaster of the heat: 750 passengers, hot weather, and no soap
·Wild fights among the musicians―watch out for that flying plate!
·Tips about cruising to Mexico, South America, and the Caribbean, including her personal adventures

While the cruise industry has always been popular, this book has been credited with increasing the cruise business by 3,000 percent. Filled with photos of Ms. Saunders and other famous personalities, Love Boats gives you the chance to find out why going on cruises has become so popular, places you might like to visit, and her entire, amazing story. Get this book for a fun, delightful reading experience.

Have you ever wanted to meet a person who changed the world? In her own way, that's what Jeraldine Saunders has done. Her autobiographical book, and the TV series that came from it, is the reason for a 3,000 percent increase in the cruise ship industry. She is quite literally responsible for making it the enormous success that it is today.

How could one book make such a change? You can find out when you read Love Boats (revised and expanded version of The Love Boats). You'll also be amazed and amused at her many experiences during her ten years as a cruise director.

Unlike the fictional stories on the TV show, the stories you read here are all true. Tales of love and hate, sex and silliness, greed and generosity, beauties and beasts, all on the ships that travel the seas to give their passengers a chance to see the world and experience life to its fullest.

Jeraldine is a student of astrology, numerology, graphology, palmistry, and more. You'll read about this, too, including a wonderful explanation of why some seemingly scientifically-minded people don't accept astrology (no funding for research), and what will happen in the future.

This photo-filled book is fun to read and filled with information and observations about life and the world. Get your copy of Love Boats today.

The original Love Boat Cruise Director, Jeraldine Saunders is known world-wide for her books, lectures, and civic activities. She has published eleven books, and has appeared on Good Morning, America, Johnny Carson, Merv Griffin, and more than 850 other TV and radio talk shows all over the world. She serves as National Spokesperson for the Hypoglycemia Foundation of America, and is affiliated with the American Federation of Astrologers; Poets, Essayists, and Novelists (PEN); Film Welfare League; Screen Actors Guild/American Federation of Television and Radio Artists; Academy of Television Arts & Science; and the International College of Applied Nutrition. Jeraldine also lectures worldwide on astrology, graphology, numerology, palmistry, and face-reading. THE LOVE BOATS is an autobiographical account of Jeraldine's years as a hostess, then cruise director aboard several posh luxury ships. After a career as a couturier model, Jeraldine took a job lecturing on astrology, motivation, and the Four Seasons color concept on cruise ships before becoming the industry's first female Cruise Director. She turned this decade-long experience into a book, then later parlayed that into a television series, THE LOVE BOAT, currently in syndication in over 110 countries.