Items related to CQ′s Encyclopedia of the U.S. Census

CQ′s Encyclopedia of the U.S. Census

CQ′s Encyclopedia of the U.S. Census 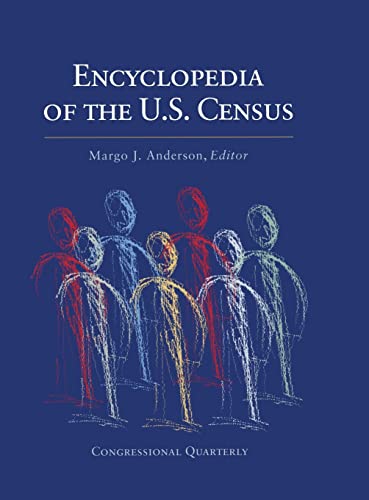 Encyclopedia of the U.S. Census represents a unique and definitive collaboration among more than 80 leading experts on all aspects of the U.S. Census. Drawing from academia, government, and the private sector, CQ Press and the editorial board have commissioned more than 100 concise, definitive articles on the decennial census and related topics.

Other features include a 16-page photo collection that visually shows the census evolution, and an extensive glossary of terms. An appendix of useful information and a detailed index round out the volume. Most articles include references for further reading; many also point the reader to online resources for census information.

Margo J. Anderson is a Professor of American History at the University of Wisconsin – Milwaukee and has published several books on the U.S. Census.

As the basis for apportionment, the U.S. Census is the "mechanism for distributing political power and economic resources, " which makes it among the most important activities the federal government performs. According to the editor the decennial census, with more than 500,000 employees, is "the largest peace-time operation undertaken by the federal government." Just in time to help researchers comprehend the results and significance of Census 2000, this new resource is designed to serve as a ready-reference tool for anyone interested in the concepts, politics, and history of census taking in the U.S.The signed articles are alphabetically arranged and have been prepared by scholars and professional census experts to explain the history, methodology, and results of U.S. censuses since 1790. Users can read about the Accuracy and Coverage Evaluation (ACE) program, designed to measure and correct the net undercount; learn the confidentiality policy that keeps information on specific individuals under wraps for 72 years; see how demographic shifts in the U.S. population led to political controversies and compromises; identify federal depository libraries; and view sample forms and questions.Maps, tables, and charts show how the composition of the population has changed, where the center of population has moved over time, and how the address lists and census tracts are developed. Gerrymandering is illustrated clearly in the article Apportion ment and districting. A 16-page photo section gives a historical overview of U.S. census-taking operations^B and shows, among other things, the evolution of the related technology, from Herman Hollerith's punched-card system to UNIVAC to today's computers.The appendix includes information on census-related budgets and costs ($44,000 in 1790 versus $2,600,000,000 in 1990), a list of the 35 Census Bureau directors to date (only two women), and a list of Internet sites that provide census information. There is a limited glossary, which includes acronyms like PUMS (Public Use Microdata Sample) and terms like special place and census designated place but does not list terms patrons often hear in population discussions, like DINK and POSSLQ.P.L. 94-171 mandates the Census Bureau must supply congressional redistricting data to the states by April 2001. This volume should be on library shelves by then to help field the questions that are sure to follow. RBB
Copyright © American Library Association. All rights reserved