Items related to Pharmacology Is Murder 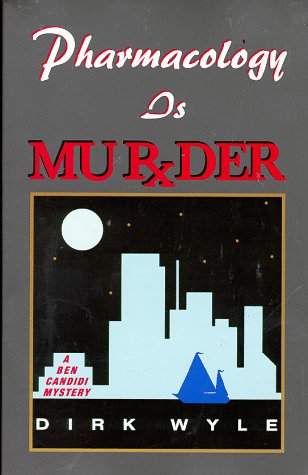 Ben Candidi goes undercover as a Ph.D. student at Bryan Medical School in order to solve the murder of the chairman of the Pharmacology Department there

PHARMACOLOGY IS MURDER is Rainbow's first mystery fiction book; and we're so impressed with Dirk Wyle's work that we'll be publishing the sequel, BIOTECHNOLOGY IS MURDER, in 1999. While the science in PHARMACOLOGY IS MURDER is impressive and fascinating Wyle has the ability to allow the novice to understand and follow along this is an impressive book on several levels. Wyle's ability to build characters, atmosphere, and empathy is truly impressive. Most mystery novels are too often lacking in these qualities. But not PHARMACOLOGY IS MURDER. This is more than an innovative murder. It is about people in a special time and place who come alive before your very eyes. Wyle knows how to begin, sustain, and end a novel. He gets off to a swift start with all the elements required to hook a reader; and the conclusion is a killer, though the killer has already been caught. In fact, the closing is so effective and real, it brings tears to the reader's eyes, and all as the result of what has transpired in this almost flawless drama. PHARMACOLOGY IS MURDER carries with it the beauty of a well-written novel. Cheers to Dirk Wyle, and best regards to his main character and sleuth, Ben Candidi, one of the most engaging and attractive sleuths I've met in a very long time as a dedicated devotee of mystery fiction." -- Betty Wright, Publisher, Rainbow Books, Inc.

I sat down at the keyboard to write Pharmacology Is Murder with the goal of producing an exciting, yet believable, scientific who-dun-it. My thirty-some years of biomedical lab research had furnished my subconscious with a host of interesting characters and medical murder weapons. I have always enjoyed 'police procedurals,'and was excited about bringing a high degree of realism to Pharmacology Is Murder. But I also wanted a human aspect, something more than the story of a dedicated team of truth-seeking workaholics. So I chose to tell the story in the words of my protagonist, Ben Candidi Mensa genius and underachiever, master of everything interesting and nothing practical, ecology idealist and boat bum. Pompous Medical Examiner Westley, Ben's 'partner in crime,' coalesced from the distant spirits of the dozen old-school English biochemists I have known. After I wrote the first twenty pages of Ben and Dr. Westley's secret collaboration, their psychological dynamic started to take on a life of its own. After sprinkling every tenth page with a generous portion of Miami spice, I was surprised to learn that the city's personality had actually stimulated the thirst for murder. My guidance for the denouement came from an ancient truth about scientific discovery: It always takes longer than you think, and you never know when the discovery will come to you.