Items related to Entanglement: The Greatest Mystery in Physics 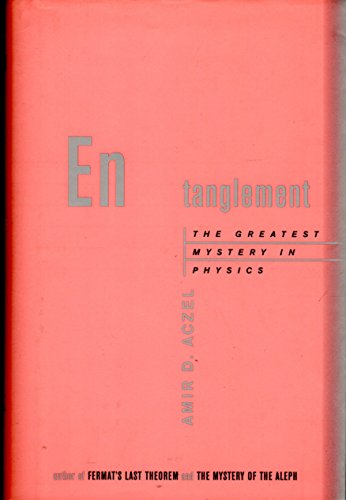 Since cyberspace became reality, the lines between "science" and "science fiction" have become increasingly blurred. Now, quantum mechanics promises that some of humanity's wildest dreams may be realized. Serious scientists, working from Einstein's theories, have been investigating the phenomenon known as "entanglement," one of the strangest aspects of our strange universe. According to Einstein, quantum mechanics required entanglement — the idea that subatomic particles could become linked, and that a change to one such particle would instantly be reflected in its counterpart, even if separated by a universe. Einstein felt that if quantum theory could produce such bizarre effects, then it had to be invalid. But new experiments show that not only does it happen, but that it may lead to unbreakable codes, and even teleportation, perhaps in our lifetime.

Amir D. Aczel is a professor at Bentley College in Wallham, MA.

In his newest book, Aczel (Fermat's Last Theorem) discusses a great mystery in physics: the concept of entanglement in quantum physics. He begins by explaining that "entanglement" occurs when two subatomic particles are somehow connected or "entangled" with one another, so that when something happens to one particle, the same thing simultaneously happens to the other particle, even if it's miles away. However, this concept violates the theory of special relativity, since communication between two places cannot occur faster than the speed of light. Einstein knew that the mathematics of quantum theory predicted that this could happen, but he didn't believe it. In the last decade, researchers have shown in laboratory experiments that entanglement does indeed happen, and in one case it occurred over a distance of almost 10 miles. Aczel explores how a Star Trek-like teleportation may be possible via entanglement (however, a particle's quantum state, not the entire particle, is teleported to its mate), though perhaps at the expense of demonstrating entanglement's more real-world applications to cryptography. General readers may need to skim over his technical explanations, whereas more advanced readers will be interested in only the last third of the book. While the book won't satisfy dedicated science buffs, it will be an accessible entry into this concept of quantum physics.
Copyright 2002 Reed Business Information, Inc.