Items related to In America 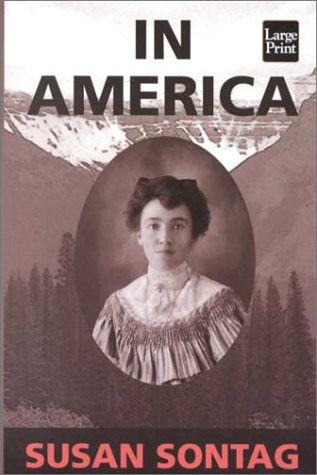 In America is a kaleidoscopic portrait of America on the cusp of modernity. As she did in her enormously popular novel The Volcano Lover, Susan Sontag casts a story located in the past in a fresh, provocative light to create a fictional world full of contemporary resonance.

In 1876 a group of Poles led by Maryna Zalezowska, Poland's greatest actress, emigrate to the United States and travel to California to found a "utopian commune." When the commune fails, Maryna stays, learns English, and―as Marina Zalenska―forges a new, even more triumphant career on the American stage, becoming a diva on par with Sara Bernhardt.

In America is about many things: a woman's search for self-transformation; the fate of idealism; a life in the theater; the many varieties of love; and, not least of all, stories and storytelling itself. Operatic in the scope and intensity of the emotions it depicts, richly detailed and visionary in its account of America, and peopled with unforgettable characters.

In America is the winner of the 2000 National Book Award for Fiction.

As an essayist, Susan Sontag has tended to stick pretty rigorously to the modern age, whether she's anatomizing the wild world of camp or roasting Leni Riefenstahl over the coals. But in her fiction--particularly in such fin-de-sičcle productions as The Volcano Lover--she's clearly felt the allure of the past. And In America, which chronicles the travails of a late-19th-century actress, shows Sontag in top time-traveling form. What's more, it illuminates her motives for glancing so persistently backward. "Almost everything good seems located in the past," she notes in a first-person prologue, "perhaps that's an illusion, but I feel nostalgic for every era before I was born; and one is freer of modern inhibitions, perhaps because one bears no responsibility for the past." There's nothing, it seems, like the age of innocence--a golden moment before we moderns had the curse of self-consciousness brought down on our heads.

It's ironic, then, that In America revolves around a regular paragon of self-consciousness: a brilliant Polish diva named Maryna Zalezowska. The year is 1876, and this Bernhardt-like figure has decided to abandon the stage and establish a utopian commune in (you guessed it) California. Not exactly a logical career move, is it? Yet this journey to America does involve a major feat of self-reinvention, for which Maryna may be uniquely qualified. Writing a letter home from the brave new world of Hoboken, New Jersey, she argues against the idea that "life cannot be restarted, that we are all prisoners of whatever we have become." And once she arrives in Anaheim with her husband, child, and fellow utopians in tow, she does seem to slough off the skin of her older, European self. She is now that exotic creature, an American, existing in an equally exotic landscape--which happens to elicit some of Sontag's most lyrical prose:

They had never felt as erect, as vertical, their skin brushed by the hot Santa Ana wind, their ears lulled by the oddly intrusive sound of their own footfalls.... Hardly anything is near anything here: those slouching braided sentinels, the yucca trees, and bouquets of drooping spears, the agaves, and the squat clusters of prickly pears, all so widely spaced, so unresembling--and nothing had to do with anything else.

Given its subject matter, Sontag's novel is oddly anti-dramatic: she juggles a half-dozen narrative strategies but seldom allows us to sink our teeth into a prolonged scene. Yet she delivers a great many other riches by way of compensation. Her take on the perils and pleasures of expatriation is worthy of Henry James (who actually makes a cameo appearance, assuring Maryna that England and America will morph into "one big Anglo-Saxon total.") And she includes a superbly entertaining portrait of theatrical life, culminating in a virtuoso monologue from Edwin Booth that suggests a Gilded Age Samuel Beckett. As always, there is the pleasure of watching the author's formidable intelligence at work, immersing us in the details of a character or landscape and then surfacing for a deep draught of abstraction. Perhaps Sontag is too cerebral to ever produce a straightforward work of fiction. But this time around, anyway, she brings both brains and literary brawn to bear on what Henry James himself called "the complex fate" of being an American. --James Marcus

Susan Sontag is the author of four novels, The Benefactor, Death Kit, The Volcano Lover and In America; I, Etcetera, a collection of stories; several plays; and five works of nonfiction, among them Illness as a Metaphor and AIDS and Its Metaphors. In 2001 she was awarded the Jerusalem Prize for the body of her work.