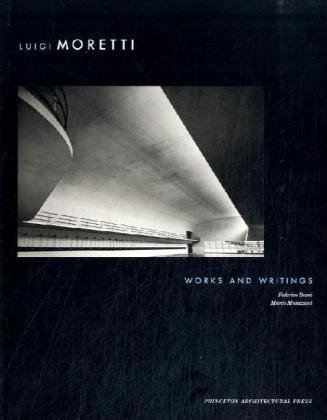 DESCRIPTION: Luigi Moretti is the first English-language monograph on the Italian architect (1907-1973) whose monumental works include the urban plan of the Foro Italico, the Piazza Imperiale, and Palazzo Civilta Italiana, all in Rome, and his renowned entry for the E.U.R. competition of 1937. His post-World War II works include Casa Girasole in Rome, the Watergate complex in Washington, D.C., and, with Pier Luigi Nervi, the Stock Exchange Tower in Montreal. In addition to his buildings, Moretti created an important body of theoretical works, published primarily in the journal Spazio, which he cofounded in 1950. Much adored by architects, Moretti's works have been largely overlooked by architectural historians. This beautifully illustrated book containing essays, projects, and an anthology of Moretti's own writings will introduce this important architect to the English-speaking world.

Marco Mulazzani teaches at the I.U.A.V. in Venice.

This translation is the first English-language book about Luigi Moretti (1907-73), a brilliant and controversial Italian architect and urbanist. Moretti began his career as a Fascist prodigy, conceiving audacious spaces and structures for Mussolini's regime. After World War II, he developed a powerful sculptural style influenced by Baroque architecture. Some of his postwar urban planning is thought to have disfigured Roman neighborhoods; his sole U.S. project is the ill-fated Watergate complex in Washington, DC. The authors are Italian architectural historians who make the case that Moretti's work is due for reevaluation, though it is hard to sympathize with their feeling that in his later years he was unfairly maligned for being a Fascist. Bucci (Albert Kahn: Architect of Ford) reviews the architect's written and graphic output, while Mulazzani analyzes the designs. Essays on historic architecture and theory by Moretti are included, as is an unsigned essay on Moretti's life that begs the question of why he chose a totalitarian path. For large academic libraries. David R. Conn, Surrey P.L., BC
Copyright 2002 Reed Business Information, Inc.