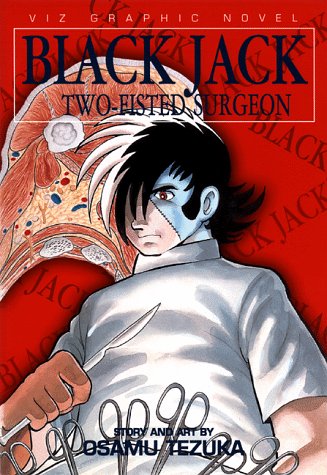 Somewhere between medical drama, cartoon humor, and film noir lies Black Jack, the ongoing adventures of an underground doctor who is the last resort for some very unusual patients. In this volume, the risk-taking Black Jack is at the mercy of a doctor after a horrible car wreck.

Osamu Tezuka (1928-89) is the godfather of Japanese manga comics. He originally intended to become a doctor and earned his degree before turning to what was then a medium for children. His many early masterpieces include the series known in the U.S. as Astro Boy. With his sweeping vision, deftly interwined plots, feel for the workings of power, and indefatigable commitment to human dignity, Tezuka elevated manga to an art form. The later Tezuka, when he authored Buddha, often had in mind the mature readership that manga gained in the sixties and that had only grown ever since. The Kurosawa of Japanese pop culture, Osamu Tezuka is a twentieth century classic.

“Surely there’s nothing in this series more continually striking than the artist’s relentless, guaranteed depictions of surgery itself, happy rubber skin always peeled away to show realist meat and bone, minutely detailed organs mended or transplanted, then covered up again in the stuff of effortless napkin doodles... I found even the least of [these stories] fascinating examples of an artist casting his net especially far, secure in his talented hands and firm in his fame—ready to confront any malady, striving to cut away any harm, instrument tips sharp
for making flesh whole.” —Jog –The Blog

“‘Iconic’ doesn't begin to sum up Black Jack's importance in the world of manga... I see a lot of Tezuka fans reaching for their wallets—not just for this volume alone, but for the whole of Black Jack as it's finally being re-released in the English-language edition it has always deserved. It was, and will be, more than worth the wait. Platinum Award.” —Advanced Media Network

“Totally fun, totally engrossing. Black Jack is a page-turner of the highest order, and I blew through 280+ pages and I'm hungry for more.” —Comics212.net

“Great material—classic crazy Tezuka with a bloody medical heartbeat tuning out the sound of man's inhumanity to man.” —Newsrama

“While Astro Boy is more iconic and Phoenix is more epic in scope, Black Jack is arguably Tezuka’s best and most enjoyable work... [It] hits Tezuka's sweet spot where his heart, his head and his sense of humor meet in perfect company.” —About.com

“To match the beautiful outside, Camellia Nieh did a fantastic job with the translation. The entire book was a fantastic read cover-to-cover that I refused to put down. Whether you're just getting into manga, or have been a fan for decades, it would be a shame not to own this seminal title.” —Japanator

“The stories are a unique mix of an Isaac Bashevis Singer morality tale, and outstanding creative medicine. Though Black Jack is aimed at a young audience, it has maturity not found in adult works. It's a piece of comic art that excels in form, and message.” —Ain’t It Cool News

“Vertical, Inc. has promised 17 volumes of Black Jack to be released every other month over the next three years. That seems like a bold commitment, until you start reading the stories... From sores that look like faces (and talk, too) to eyes that see ghosts, the busy doctors on ‘E.R.’ never had to deal with any of these unique patients. Osamu Tezuka’s attention to detail on close-ups for surgeries and strange growths makes for some rubber-necking horror hard to turn away from. Black Jack is a 10.” —Comics Village

“Black Jack was Tezuka at his best; moving beyond his comfort zone, away from licensable children’s robot characters (for him) uncharted gekiga manga territory... You don’t need a doctor’s prescription and there’s no complicated follow-up medication or painful physical therapy—just some serious entertainment from the pen of one of the world’s masters of comics.”—Let’s Anime