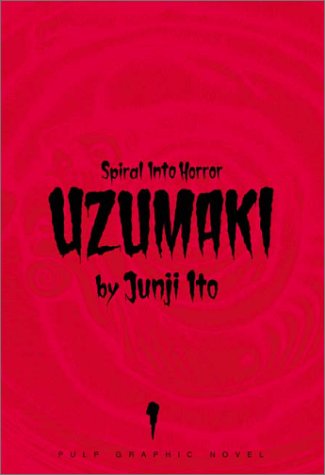 Shortly after Shuichi Saito's father becomes obsessed with spiral patterns, he dies mysteriously, his body positioned in the shape of a twisted coil, and soon the entire town is afflicted with a snail-like disease. A Graphic Novel. Original.

Junji Ito debuted as a horror manga artist in 1987 with the first story in his successful Tomie series. Uzumaki, drawn from 1998 to 1999, was adapted into a live-action movie, which has been released in America by Viz Films and Tidepoint Pictures. It's influences include the classic manga artists Kazuo Umezu and Hideshi Hino, as well as authors Yasutaka Tsutsui and H.P. Lovecraft.

The townspeople of Kurozu-cho are being haunted by a strange infection of spirals. When corpses are cremated, the smoke forms a black spiral in the sky, and the clouds form swirls like those in Van Gogh's The Starry Night. Soon, things intensify: a lighthouse throws out spiral beams at dusk; babies are born, only to sprout spiral-capped mushroom-shaped appendages from their stomachs; one man becomes obsessed with spirals until he goes completely mad. The spirals even begin to infect people's bodies, leaving grotesque spiral voids. Readers witness these chilling disturbances through Kirie, a wide-eyed schoolgirl with a pixie cut, whose world is drawn in typical, lighthearted teen-romance manga style. When she's at home or school, things seem normal, but the sudden contrasts between the ordinary events of everyday life and this mysterious invasion of chaotic, threatening spirals makes the horror all the more shocking. Ito knows how to make readers' hearts drop and stomachs turn, but once the scare factor wears off there's not much more to the book .Characters enter the story only to become part of the town's body count, and Kirie, a constant survivor, is no more than a vehicle for the next spooky outbreak of deadly spirals. She reacts to each ordeal with fear and manages to escape before the spirals show up yet again. She doesn't attempt to find a solution, and there's barely any character development or plot. Ito's b&w drawings are well done and scary, but the book's essentially an empty thrill.
Copyright 2002 Reed Business Information, Inc.