Items related to FJH1464 - In Recital Throughout the Year - Volume One... 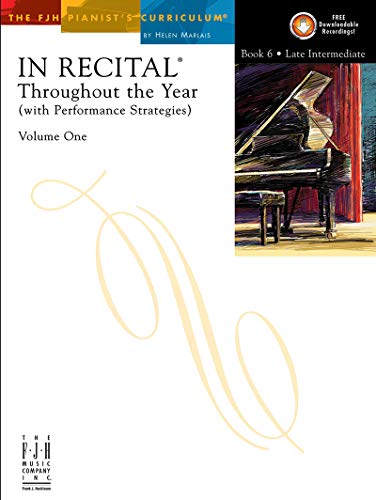 Some of the most rewarding In Recital music is here in the final book of Volume One! Melody Bober leads off with a lyrical solo, First Snowfall; Kevin Olson then offers an arrangement of J.S. Bach s Toccata and Fugue in D Minor, BWV 565; and later, a jazzy Christmas solo, Jingle Bell Jam; Ed McLean contributes his rendition (an equal-part duet) of the Toreador Song, from the opera Carmen, while Mart n Cu llar, David Karp, and Timothy Brown (2 solos!), showcase highlights of their own. New elements include dotted eighths, triplet sixteenths, scales in tenths, syncopation, jazz chords, parallel and color chords, middle pedal use, and more, found in the teaching text and the CD. Also includes: Romanza (Martin Cuellar); Bagatelle (Timothy Brown); Dans le jardin (Timothy Brown); Toccatina (David Karp).

Helen Marlais' active performance schedule includes solo and collaborative concerts throughout North America, Europe, and Asia. Her travels abroad have also included performing and teaching at some of the world's leading conservatories and festivals in Italy, France, Hungary, Turkey, Lithuania, and China. She has performed with members of the Pittsburgh, Minnesota, Grand Rapids, Des Moines, Cedar Rapids, and Beijing National Symphony Orchestras. Dr. Marlais is recorded on Gasparo and Centaur record labels, and has had numerous collaborative performances broadcast regionally, nationally and internationally, on radio, television, and the Internet with her husband, clarinetist, Arthur Campbell. She is the Director of Keyboard Publications for The FJH Music Company, and has performed and given workshops at local, state, and national music teachers conventions. She serves on two national committees, the National Piano Performance and Pedagogy Committee and the Piano Pedagogy Curriculum National Task Force, and her articles can be read in Keyboard Companion, The American Music Teacher, and Clavier magazines. Dr. Marlais is an Associate Professor of Piano at Grand Valley State University in Grand Rapids, MI, where she directs a comprehensive piano pedagogy program and coordinates all of the group piano programs. She also hosts an annual piano pedagogy conference, featuring nationally and internationally recognized clinicians and performers. She received her DM in piano performance and pedagogy from Northwestern University and her MM in piano performance from Carnegie Mellon University. She has also held full-time faculty piano positions at the Crane School of Music, S.U.N.Y. at Potsdam, Iowa State University, and Gustavus Adolphus College.

1. In Recital Throughout the Year, Volume One, Book 6 With CD - Late Intermediate Piano Solo