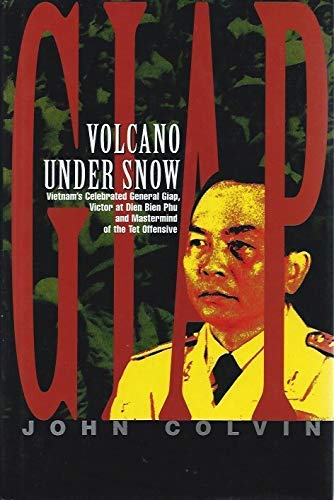 A portrait of Vietnam's most important military leader, General Giap, discusses his military tactics and campaigns, his role in the Vietnam War, and his impact on the pivotal battles of that war, from the 1940s to the fall of Saigon in 1975.

Not a biography, but a subjective military history of the 194575 Indochina wars, in which the British author argues that the Vietnamese victories were primarily due to French and American mistakes rather than the superior leadership of the commanding Vietnamese general, Vo Nguyen Giap. Colvin, who was British consul in Hanoi from 1965 to 1967, presents a wealth of battlefield detail about the French and American wars in Vietnam. He describes many battles and skirmishes, and thoroughly examines tactical and strategic details. The military history is generally accurate, although Colvin makes the grossly untrue statement that the US Army and Air Force in Vietnam ``lived in air-conditioned bases.'' Along with the facts, Colvin includes his opinions, arguing, for example, that the US could have stopped a communist victory in Vietnam by mining the northern ports and letting loose an ``aerial interdiction'' on northern borders in 1965 to prevent war materiel from entering North Vietnam. Colvin characterizes Gen. Giap and North Vietnamese leader Ho Chi Minh as ruthless if brilliant men who depended on the calculated use of ``terror and patriotism'' to propel the war effort. Giap, Colvin says, was an overrated commander who was victorious because of his willingness to sacrifice hundreds of thousands of lives and because of the large-scale support he received from China and the Soviet Union. Colvin criticizes some aspects of French colonialism but credits the French with having ``great virtues'' in colonial Vietnam, such as building ``small but lovely cities.'' Colvin condemns the American war strategies of attrition and Vietnamization. Most startlingly, Colvin attributes the communist victory in part to the actions of some elements of the American antiwar movement. A ``revisionist war crimes tribunal today,'' Colvin says, ``would have no difficulty in naming the accused: Jane Fonda, Eldridge Cleaver, and the rest of them.'' A battlefield history is marred by unsupported historical speculations and opinions. -- Copyright ©1996, Kirkus Associates, LP. All rights reserved.

British diplomat Colvin, who served as consul in Hanoi during the 1960s, can't quite keep a focus in this loosely structured biography concerning Vo Nguyen Giap's controversial career as a self-taught general and key figure in the Vietnamese revolution. Instead, he regularly drifts away from Giap to present a highly impressionistic narrative of the First and Second Indochina Wars. Colvin's bibliography lists archival material from France, the U.K. and the U.S. Even casual students, however, may perceive the author's heavy reliance on such standard accounts as Bernard Fall's Street Without Joy and Gunther Levy's America in Vietnam. Colvin's analysis of Giap seems to be similarly derived in large part from Robert O'Neill's General Giap and Peter Macdonald's Giap: Victor in Vietnam. The author's interpretation of Giap as a first-rate practitioner of war as a synthesis of military and political approaches is defensible, albeit conventional. But his insistence that Giap, rather than his Chinese "advisors," planned the Dien Bien Phu campaign of 1953-1954 must be evaluated in the context of Quang Zhai's trailblazing article "Transplanting the Chinese Model" in The Journal of Military History (October 1993). More generally, Colvin's case for the success of Vietnamization after 1969 seems seriously overstated, as does his argument that South Vietnam's collapse in 1975 was in good part the result of abandonment by the U.S. Neither position is sustained by the limited scholarship of a work that is more a personal statement than a serious intellectual contribution.
Copyright 1996 Reed Business Information, Inc.