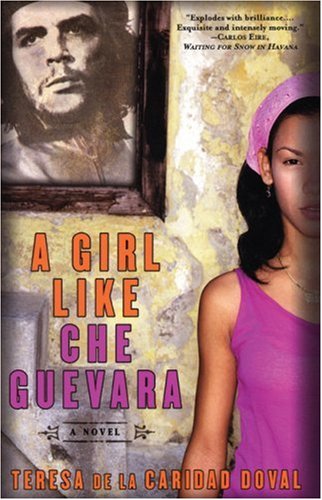 Sixteen-year-old Lourdes is a dedicated and proud revolutionary who spends the summer of 1982, along with her peers, at the “School-in-the-Fields,” tilling tobacco fields to prove her dedication to Fidel and the revolution.

But she is also a study of contradictions. Lourdes outwardly scoffs at the old ways but wears an azabache amulet under her clothing, next to her Che medallion, to ward off evil spirits. She secretly prays to the orisha Yemayá while she pledges her fealty to Fidel and the secular socialist ideals of her father, a professor of scientific Communism at the University of Havana. She develops a crush on her roommate at the camp, but, like many other things in the socialist regime under which she lives, same-sex relationships are forbidden. Like other girls her age, she longs to wear smuggled Jordache jeans and drink Cuban coffee, to watch American cartoons and eat steak whenever she wants. All simple pleasures, all denied her by the same revolution she serves. What she has are the harsh realities of life in a glorified work camp, which lead her to question her allegiances. Why does she want to be like Che? .

Teresa de la Caridad Doval was born in Havana, Cuba, in 1966. She attended the University of Havana and earned a BA in English literature and an MA in Spanish literature. She left Cuba in 1996 and currently lives in Albuquerque, New Mexico, with her husband

Doval provides an intimate portrait of life inside Communist Cuba in this absorbing if uneven debut. It is January 1982: Che Guevara is a national icon; bread lines curl around Havana corners; and 16-year-old Lourdes Torres is leaving her sheltered urban existence, bound for a camp in the nationalized tobacco fields of the western province of Pinar del Rio. Despite receiving conflicting messages about life in Cuba—the meager food rations vs. communism's pledge to provide for everyone; professed egalitarianism vs. racial discord in her own mixed-race family; an atheistic government vs. clandestine religious sacrifices—Lourdes is an idealist. Socialism makes life better for all, she thinks, and no one is oppressed under Castro's benevolent leadership. Once at the state-run work-study program called School-in-the-Fields, Lourdes learns a lot more about life than she does about tobacco cultivation. There's sex, for one thing: she desires her gorgeous friend Aurora, who "changed lovers as easily and shamelessly as she changed clothes," but she finds a boyfriend in Ernesto, and everywhere, people are hooking up and peeling apart. Her naivete slowly crumbling—after vain, youthful attempts to champion socialist ideals—she eventually becomes aware of the unbecoming underbelly of a flawed culture. By the time she returns to Havana, Lourdes has learned that racial prejudice, duplicity, incompetence, laziness, larceny and oppression are not exclusive to capitalist nations. Doval's flat-footed prose and too-deliberate exposition slow the pace, but her sensitive characterizations and rich picture of Havana and the beguiling Cuban landscape redeem her story.
Copyright © Reed Business Information, a division of Reed Elsevier Inc. All rights reserved.