Items related to Covenants Not To Compete, 6th Edition

Covenants Not To Compete, 6th Edition 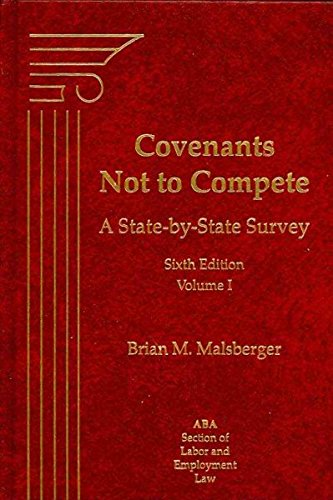 covenants in the employment, partnership, franchise, and sale-of-business contexts. Covenants Not to Compete: A State-by- State Survey, Sixth Edition provides a full range of in-depth analysis for covenant enforceability issues across the nation. The Sixth Edition of Covenants Not to Compete: A State-by-State Survey addresses questions of first impression interpreting new state statutes limiting the enforceability of covenants not to compete executed by employees in the broadcasting industries; contains expanded analysis of covenant-protectable interests in both actual and potential customers relationships; and has an increased focus on covenants in the health care professions. Covenants Not to Compete: A State-by-State Survey, Sixth Edition fully examines which jurisdictions apply a heightened level of scrutiny to noncompetition covenants in the health care industries; instances when courts determine that enforcement of a particular noncompete provision would unreasonably harm the public interest; and how courts determine whether a former employee would have an unfair competitive advantage in the absence of a restrictive covenant. This treatise also discusses issues of contract interpretation governing such subjects as when the restrictions imposed by a covenant are meant to commence; the inevitable disclosure doctrine for trade secrets; preemption by state trade secret law; and special issues for nondisclosure covenants.

1. Convenants Not to Compete: A State-by-State Survey

2. Covenants Not To Compete, 6th Edition