Items related to `The Novels of Erich Maria Remarque: Sparks of Life...

`The Novels of Erich Maria Remarque: Sparks of Life (Studies in German Literature Linguistics and Culture) 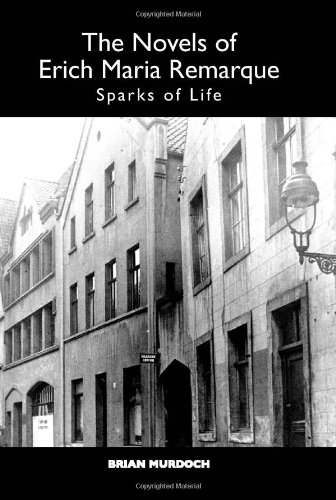 Erich Maria Remarque is a writer of great popularity who has rightly been described as a "chronicler of the twentieth century." He is both a German writer and a genuinely international one. Although he spent much of his life in exile from Germany, most of his novels reflect its twentieth-century history: the two world wars and the Weimar and Nazi regimes, and especially their effects on the individual. His portrayals of the lives of refugees from Nazi Germany are especially vivid. His themes are universal, dealing with human relationships, with love in particular, and with the provisional nature of life. Often seen as a one-novel writer due to the immense success of All Quiet on the Western Front, Remarque wrote many other novels, major works that have nearly all been filmed and have remained popular. Nor should it be ignored that his works are above all else immensely readable: not a negligible criterion. This new study of Remarque's novels treats them as a chronicle of the century, but also looks at them as works that go beyond the reflection of historical events. Brian Murdoch is Emeritus Professor of German at the University of Stirling, Scotland.

Brian O. Murdoch is Emeritus Professor of German in the School of Languages, Cultures, and Religions at Stirling University, Scotland.

This book champions Remarque's novels as representing a solid track record of first-class literature. Murdoch successfully strives to overcome the stigma of critics who have relegated Remarque as a trivial writer.... GERMAN STUDIES REVIEW Murdoch has consolidated his and others' research in this useful treatment of Remarque's life and work. Those new to Remarque will find this an excellent introduction to the author's entire literary corpus. CHOICE Murdoch aims to present Remarque as a German writer who was also prominent internationally and, beyond this, a writer whose significance goes far beyond his best-known work, Im Westen nichts Neues. At the same time he attempts to show that he was no mere writer of escapist literature. MONATSHEFTE Murdoch has . performed a great service in registering exactly what Remarque published, in what order and when, and how various films relate to the writings-tasks made all the more difficult because Remarque enjoyed playing the mystery-man. MLR This book offers a concise survey of Remarque's novels that underscores the values of his novels that have been previously overlooked. As an introductory survey, it will be an important contribution to the teaching of Remarque's works. H-NET REVIEWS

1. The Novels of Erich Maria Remarque: Sparks of Life (Studies in German Literature Linguistics and Culture)

2. The Novels of Erich Maria Remarque: Sparks of Life (Studies in German Literature Linguistics and Culture)

3. The Novels of Erich Maria Remarque: Sparks of Life (Studies in German Literature Linguistics and Culture)