Items related to Montana 1948: A Novel 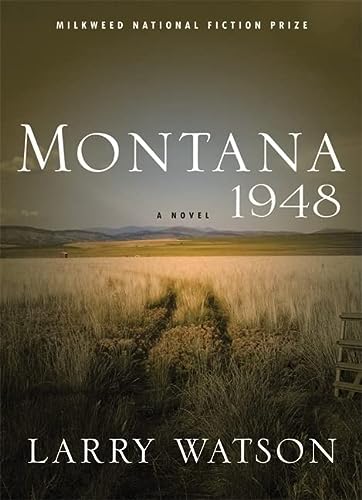 From the summer of my twelfth year I carry a series of images more vivid and lasting than any others of my boyhood and indelible beyond all attempts the years make to erase or fade them So begins David Hayden’s story of what happened in Montana in 1948. The events of that cataclysmic summer permanently alter twelve-year-old David’s understanding of his family: his father, a small-town sheriff; his remarkably strong mother; David’s uncle Frank, a war hero and respected doctor; and the Haydens’ Sioux housekeeper, Marie Little Soldier, whose revelations turn the family’s life upside down as she relates how Frank has been molesting his female Indian patients. As their story unravels around David, he learns that truth is not what one believes it to be, that power is abused, and that sometimes one has to choose between family loyalty and justice.

Larry Watson teaches English at the University of Wisconsin at Stevens Point and lives in Plover, Wisconsin.

Beau Bridges's reading of this tragic story of a struggle between family loyalty and justice is outstanding. Twelve-year-old David Hayden's view of his family and his life is forever changed by the events in his small town. And, surprisingly, through a series of lies, the town itself is never totally aware of all the Hayden family problems and decisions. Bridges manages to convey the powerful emotions of David as well as all the adults involved. His subtle changes of tone and clear, distinct enunciation adds a richness and drama to Watson's characterizations. This fine work of fiction is enhanced and enriched by this narration. A real treasure! S.C.A. (c)AudioFile, Portland, Maine