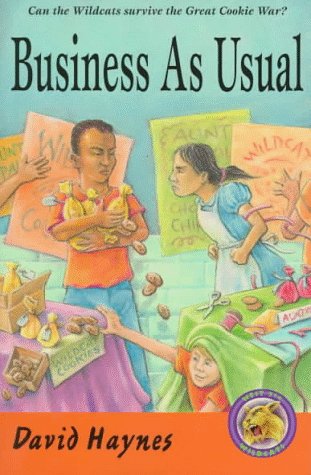 Haynes kicks off the West 7th Wildcats series, featuring a circle of sixth-grade boys involved in a thinly disguised lesson in business and economics. After looking forward to Mr. Harrison's famous economics unit for years, Bobby and his five buddies are dismayed to learn that they can only work in fours--and positively horrified when Kevin, one of the excluded, ends up in arch-rival Jenny Pederson's group. The object is to create a product to sell at River Road School's Marketplace Day, with rewards for the biggest moneymakers. To this end, Bobby and the others absorb lessons in supply and demand, market research, financing, advertising, customer service, and other topics, before settling on calorie-loaded Wildcat Cookies as their product. Practicing a bit of corporate espionage, Jenny and Kevin steal the idea, and the race is on. The storytelling is bland-- Mr. Harrison ``was nice and fun and we learned a lot''--and Kevin, described as an okay student even though he often ``forgets'' to do his work and as such a cutup that he's in danger of being expelled, never seems believable. Nonetheless, the cookie rivalry ends on a harmonious note, and the economics are laid on with a light touch. (b&w illustrations, not seen) (Fiction. 10-12) -- Copyright ©1997, Kirkus Associates, LP. All rights reserved.

Grade 5-8?The West 7th Wildcats are a racially mixed group of boys who live on the same street. Bobby Samson is the Wildcat who narrates this tale of their sixth-grade teacher's spring economics unit. Mr. Harrison makes the subject come alive for the children by having them form their own companies and compete to see who can make the most profits at the annual "Marketplace Day." It soon becomes clear that there will be intense competition and attempts to steal business secrets just as in the adult corporate world. This is how conflict develops in the story as both the Wildcats and a rival group decide to make and market chocolate-chip cookies. A subplot involves Kevin, one of the Wildcats who constantly creates trouble and ends up working with their rivals. This is in no way a literary masterpiece, but it does have loads of kid appeal. Haynes has created an entirely credible voice for Bobby and the interaction among the children is right on the mark. The characterization is minimal?Kevin is simply described as the "problem child," for example, but the brief strokes are enough. Occasional black-and-white drawings appear throughout.?Tim Wadham, Dallas Public Library, TX
Copyright 1998 Reed Business Information, Inc.

Book Description Milkweed Editions. Paperback. Condition: Very Good. A copy that has been read, but remains in excellent condition. Pages are intact and are not marred by notes or highlighting, but may contain a neat previous owner name. The spine remains undamaged. An ex-library book and may have standard library stamps and/or stickers. At ThriftBooks, our motto is: Read More, Spend Less. Seller Inventory # G1571316086I4N10

Book Description Milkweed Editions. Paperback. Condition: Good. A copy that has been read, but remains in clean condition. All pages are intact, and the cover is intact. The spine may show signs of wear. Pages can include limited notes and highlighting, and the copy can include previous owner inscriptions. At ThriftBooks, our motto is: Read More, Spend Less. Seller Inventory # G1571316086I3N00