Items related to Baltimore Then and Now

Baltimore Then and Now 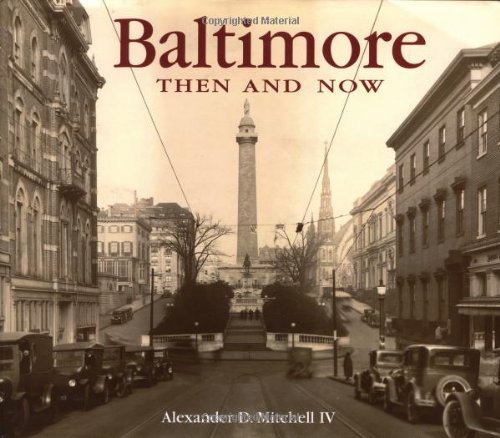 Baltimore may be world-famous for its crab cakes, Johns Hopkins University, and the Orioles baseball team, but there’s much more to this Chesapeake Bay city. With lots of unique architecture, sprawling city parks, lively harbor, and colorful neighborhoods like Little Italy and Greektown. Photographs showcase some of the city’s best-loved landmarks, including Druid Hill Park, the Baltimore Zoo, Pratt House, and the Patterson Park Pagoda. Baltimore secured its place in American history when Francis Scott Key wrote “The Star-Spangled Banner” about the bombardment of Fort McHenry. More than a hundred years later, the fort itself is still one of the city’s favorite landmarks. Pier 4 in Baltimore’s Inner Harbor offers a visual depiction of the city’s evolution. It began its life as Dugan’s Wharf and later became the Merchant & Miners Co. Pier in 1910. Now, Pier 4 is the National Aquarium, home to more than 10,000 animals and a tropical rainforest exhibit. Baltimore has its share of impressive architecture, including the beloved Bromo-Seltzer Tower. Compare its early 20th century profile—complete with a 51-foot revolving replica of the blue Bromo-Seltzer bottle—to its modern incarnation.

Alexander D. Mitchell, IV, is a writer and photographer specializing primarily in railroad and transportation issues and history. His articles and photos have appeared in numerous magazines and newspapers over the years. He is also the author of Washington DC Then and Now (1-57145-191-9). Born and raised in Selingsgrove, PA, he now resides in Baltimore.

1. Baltimore Then and Now

2. Baltimore Then and Now

3. BALTIMORE THEN AND NOW