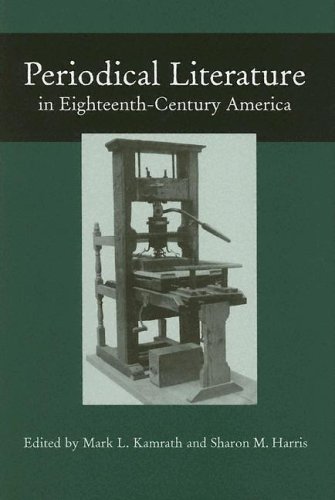 Similar to the “digital revolution” of the last century, the colonial and early national periods were a time of improved print technologies, exploding information, faster communications, and a fundamental reinventing of publishing and media processes. Between the early 1700s, when periodical publications struggled, and the late 1790s, when print media surged ahead, print culture was radically transformed by a liberal market economy, innovative printing and papermaking techniques, improved distribution processes, and higher literacy rates, meaning that information, particularly in the form of newspapers and magazines, was available more quickly and widely to people than ever before. These changes generated new literary genres and new relationships between authors and their audiences. The study of periodical literature and print culture in the eighteenth century has provided a more intimate view into the lives and tastes of early Americans, as well as enabled researchers to further investigate a plethora of subjects and discourses having to do with the Atlantic world and the formation of an American republic.

Periodical Literature in Eighteenth-Century America is a collection of essays that delves into many of these unique magazines and newspapers and their intersections as print media, as well as into what these publications reveal about the cultural, ideological, and literary issues of the period; the resulting research is interdisciplinary, combining the fields of history, literature, and cultural studies. The essays explore many evolving issues in an emerging America: scientific inquiry, race, ethnicity, gender, and religious belief all found voice in various early periodicals. The differences between the pre- and post-Revolutionary periodicals and performativity are discussed, as are vital immigration, class, and settlement issues. Political topics, such as the emergence of democratic institutions and dissent, the formation of early parties, and the development of regional, national, and transnational cultural identities are also covered. Using digital databases and recent poststructural and cultural theories, this book returns us to the periodicals archive and regenerates the ideological and discursive landscape of early American literature in provocative ways; it will be of value to anyone interested in the crosscurrents of early American history, book history, and cultural studies.

Mark L. Kamrath is associate professor of English at the University of Central Florida.