Items related to I Remember Woody 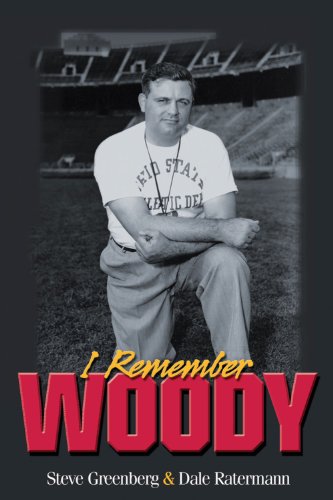 An intimate look at the life and career of Woody Hayes, this collection allows for those people who knew the Ohio State University football coach best to tell his life story. From assistant coaches to former players, administrators, friends, opponents, and the media they're all here with stories about on-the-field situations and off-the-field moments of conflict and caring that very few fans know anything about. I Remember Woody goes past the X's and O's of football to provide the story of an inspiring mentor who was an expert at guiding young men into adulthood. Readers who think they knew what made Hayes tick, will find they don't know the man behind the myth until they read this unparalleled and inspiring book about a coach who changed the lives of countless men and women.

Woody Hayes was a football genius and a legendary leader, as well as a complex man. Just when you think you’ve begun to understand what made him tick, along comes another story or anecdote to pull your thoughts in a new, albeit entertaining, direction. This book takes you into his inner circle for a personal, detailed look at the life and times of Woody Hayes—and, in the process, sheds some valuable light on some of his many complexities.

An important work, this book gives you a broad, balanced view—warts and all, as the Old Coach himself would say—of the man who dedicated his life to making Ohio State football and those around him better. It tears down the mythical walls and lets you nearly shake hands with or sit across the desk from one of college football’s all-time giants. Warm or bitter, the storytellers’ recollections will make you think hard about—and help you understand—what went into the makeup of this simple, yet extremely complicated, icon. Above all else, it sets the record straight.

Steve Greenberg is the founder and president of GreenInk Consulting, which specializes in publishing, marketing, sales, and project solutions. He is the former assistant managing editor of sports for the Indianapolis News and the Indianapolis Star. A newspaper reporter and editor for 23 years, he has won awards for writing, direction of coverage, and design. He lives in Carmel, Indiana. Dale Raterman is the executive director of the Indiana Pacers Foundation. He previously served as vice president of administration and media relations director for the NBA's Pacers. Before joining the Pacers he was assistant sports information director at the University of Illinois for seven years. He is the author or coauthor more than two dozen books. He lives in Indianapolis.