Items related to Who Built America? Working People and the Nation's...

Who Built America? Working People and the Nation's Economy, Politics, Culture, and Society, Vol. 1: From Conquest and Colonization through Reconstruction and the Great Uprising of 1877, 2nd Edition 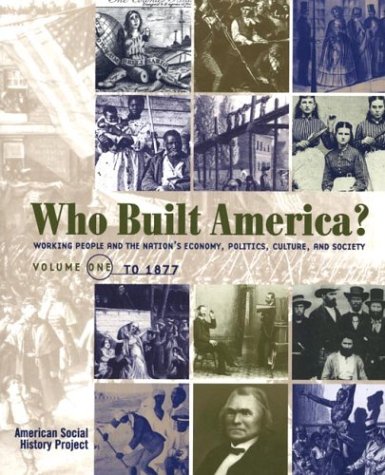 Who Built America? surveys the nation's past from the perspective of working men and women. Growing out of the effort to reinterpret American history from "the bottom up, " Who Built America? not only documents the country's presidents, politics, and wars along with the life and values of the nation's elite but also focuses on the fundamental social and economic conflicts in our history, integrating the history of community, family, gender roles, race, and ethnicity.

"This is an amazing job. The text reads as if it were the work of a single, eloquent, spirited and committed writer. The material is rich and interesting, the language forceful and compelling...the production of the book does it proud." --Roger Kennedy, Director of the National Museum of American History, on Who Built America? Volume One

"The first accessible yet sophisticated reinterpretation of early U.S. history based on the new social history. Who Built America? [Volume One] clearly reveals ours as a land of many peoples, and so it will be welcomed not only by history teachers who believe workers and the labor movement have been left out of history books but also by those high school and college educators who want to address an increasingly diverse student population with a multicultural approach to U.S. history." --James Green, Boston Globe

"My task would have been easier if I had been using Who Built America? as [my] course text. Who Built America?, Volume One, offers the most effective visual record of 18th- and 19th-century America that I have seen in text... [presenting] the graphics as documents to be analyzed and interpreted in their own right.... Similarly the written documents...bring the values, aspirations, and prejudices of the past alive and help students to understand the kinds of records from which history is constructed."
--Elizabeth Blackmar, Columbia University

American history about working Americans: what they thought, what they did, what happened to them. Volume One takes us from conquest and colonization through industrial expansion, the Civil War, Reconstruction, and the Great Uprising of 1877

1. Who Built America? Working People and the Nation's Economy, Politics, Culture, and Society, Vol. 1: From Conquest and Colonization through Reconstruction and the Great Uprising of 1877, 2nd Edition